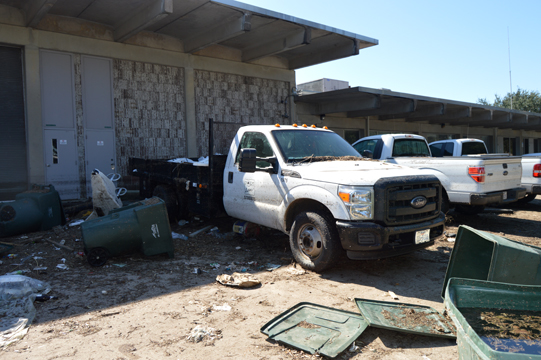 The city’s equipment fleet was damaged after Hurricane and Tropical Storm Harvey at the operations center on Highway 73. Kevin Christopher, with fleet maintenance, talked about where the fleet was and where it needs to be post-Harvey.

Rebecca Underhill, assistant to the city manager/budget officer, reported last month the cost of the total damage to the equipment fleet from Hurricane and Tropical Storm Harvey is $24.8 million.

To date, $4.9 million has been spent to replace damaged vehicles and equipment. The total equipment purchases authorized to date is $6.78 million. The insurance received to date related to equipment and vehicles is $1.3 million. It is actual cash value, not replacement cost.

The potential additional funding necessary to replace all damaged equipment could exceed $15 million.

Consequently, Kevin Christopher, with fleet maintenance, put the figure currently at $26 million. He said a fleet restoration program was implemented Jan. 23. As of March 16, 71 percent of equipment was repaired and is now in service, 29 percent is waiting on an insurance assessment, 55 percent of the fleet is currently in service while 16 percent is in repair and $2.3 million is waiting for reimbursement.

The key areas of concern about the flooded fleet are drainage, streets, parks, solid waste and utilities:

The department’s three-phase plan is to restore vehicles and equipment to pre-Harvey condition, make necessary repairs that existed prior to Harvey and implement a comprehensive and effective preventive maintenance program necessary to provide a safe and dependable vehicle or machine to the employees.

The asphalt zipper used for street construction is working, but it needs another controller. Obtaining water trucks for streets is “touch and go,” Christopher said. There’s a dealer in Houston that sells them or they can be rented from Sunbelt Rentals.