A logo that Port Arthur city leaders rejected that was later adopted by the chamber has earned a major award in the advertising field.

The logo, designed by e. Sullivan Advertising and Design with input from a rebranding committee, earned a silver Addy award at the American Advertising Federation’s Lake Charles Chapter awards ceremony this past weekend. 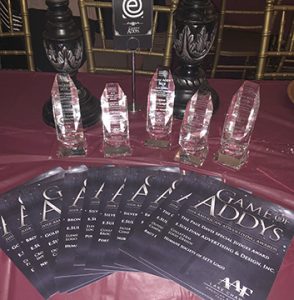 e.Sullivan Advertising and Design won a number of awards at the American Advertising Federation’s Lake Charles Chapter awards ceremony this past weekend including one for a logo rejected by the city of Port Arthur that was adopted by the chamber of commerce.
Courtesy photo

Eric Sullivan, owner of the business, said he is proud of all the designs the company does and understand when designing for a committee it can be hard to have everybody on board.

“I think this would have been a great mark of the city and am very excited the chamber took it over and that it’s being used,” Sullivan said.

Bill McCoy, president of the Greater Port Arthur Chamber of Commerce, said he is happy for Sullivan on winning the award as well as for the other awards earned recently.

The issue of updating the city’s more than 40 year old logo began in 2016. A rebranding committee was formed consisting of a representative of the city of Port Arthur, the Port Arthur Economic Development Corporation, the Greater Port Arthur Chamber of Commerce and the Port Arthur Convention and Visitors Bureau. Funding for the logo change came from the hotel occupancy tax funds- a pot of money that can only be used for promotion of the city per law.

The committee started with a number of designs that were narrowed down to three and citizens had a chance to offer feedback online.

The colorful logo chosen represented transportation, industry, Pleasure Island and the Gulf coast but when the design went to a council vote, it was shot down.

But this allowed the other entities involved a chance to adopt the new logo and left the city with the four decades old logo.

Tiffany Hamilton, the former District 2 councilwoman who was a member of the rebranding committee, is excited for e.Sullivan.

“Congratulations to e.Sullivan Advertising for all of their effort and hard work that they put into their company and into the Jefferson County community and surrounding area,” Hamilton said. “I only wish tat more citizens of our great city would recognize the benefit of a fresh look and empowered look just as the American Advertising Federal of Lake Charles has.”

Sullivan said the silver and gold Addy awarded entries will now go on to compete in the regional competition, which is for bigger markets.