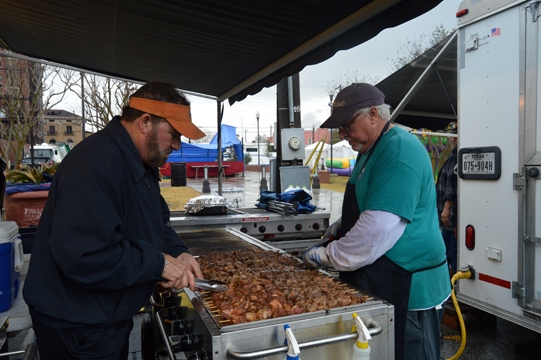 Kent Guidry, left, and Mickey Hearn, cook pork-a-bobs. Piggin’ Out is at the Mardi Gras every year.

It was Rainy Gras early on Saturday

Kent Guidry’s Piggin’ Out Pork-A-Bobs are a crowd favorite at festivals. He remained optimistic too on a soggy Saturday Mardi Gras afternoon in downtown Port Arthur.

“The rain affected the gate, but business wasn’t bad Thursday and Friday,” he said. “The forecast has kept them away. This isn’t a typical crowd. There’s still a lot of people not in their homes. Hopefully it will clear up. I don’t know what to think of today. Maybe Sunday’s forecast will be a lot better.”

William and McKayla Harris and Michael Parmer wanted to see the Krewes Royalty Parade at 2 p.m., but it was canceled because of the weather.

“We’re here to visit vendors and mill around. We saw the parade last year,” William said.

Marvin Jimenez, owner of Me So Hungry 409 food truck, said the first two days of business were “solid,” but things aren’t the same since Tropical Storm Harvey.

Jimenez has been in business for 10 months. The truck will soon have a permit to operate in Beaumont. They also have set up at the Neches Brewing Company in Port Neches, a school in Bridge City and other locations.

“We serve a variety of Southern cuisine with a twist. It’s definitely flavorful,” he said. “Our specialty is seafood and stuffed pineapple.”

Travis and Vanna Vinton, Mykayla and Peyton Kirk and Katelyn Richard were visiting the Mardi Gras in Port Arthur for the first time.

“We came here out of curiosity,” Travis said. “We moved here from central Texas last summer.”

A Port Arthur businessman is seeking assistance from the Port Arthur Economic Development Corp. in developing a shopping center on... read more