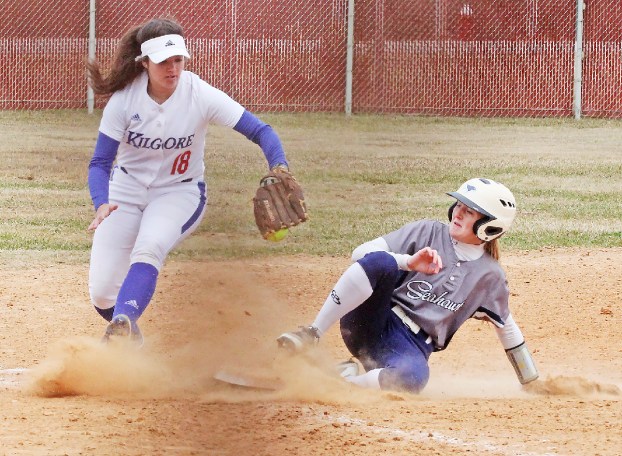 Julie French of Lamar State slides into third base against Kilgore on Friday. (LSCPA sports information) Julie French of Lamar State slides into third base against Kilgore on Friday. (LSCPA sports information)

The Seahawks blanked Kilgore 8-0 at the Galveston College Invitational on Friday morning but then things got real as Chipola College (Florida), ranked No. 5 preseason in the nation, beat LSCPA 11-2 in the afternoon game.

“The team you saw in the first game, that’s the team you’ll see this year,” said Edwards, who is now 200-386 for his career, all at LSCPA. “We let Chipola get in our heads and we can’t do that. We are as good as anyone on the field and the first game shows that.”

Edwards came on as LSCPA’s first softball coach in 2005 and with limited staff and scholarships, struggled. As the program grew, so did its coaching staff and budget as well as its wins total. Over the past six years, Edwards’ teams have amassed 159 of his 200 career wins and the Seahawks have advanced to the NJCAA Region XIV Tournament three straight seasons.

“This isn’t about me,” Edwards said. “This is about all those people who have been a part of this program over the years. This is about the players and the coaches who have passed through Lamar State College Port Arthur and helped it become what we are now.”

In the first game Friday, the Seahawks were champions. Led at the plate by freshmen Julie French and Kaitlyn Stebelton, the Hawks pounded out 10 hits to score eight runs in a shutout over fellow Region XIV team Kilgore College.

Sophomore Hallie Boudreaux was 1 for 3 with a double while fellow second-year Seahawk Briana White was 2 for 3 with the bat.

Sophomore pitcher Ashley May got the complete-game win, allowing just two hits over five innings, getting the job done with just 53 pitches.

The second game flipped the script, though, as Chipola College, a returning national tournament participant, scored 11 runs on 13 hits to leave the Seahawks reeling in the blistering cold Friday afternoon.

At the plate, the Seahawks managed just one hit and one walk, with Morgan Chavarria collecting an RBI while White had a run and a double in the game.

The Seahawks are back in action on Saturday with a three-game set schedule, weather allowing. LSCPA will face Odessa College at 9 a.m., Snead State (Alabama) College at 1 and Navarro College, also an NJCAA Region XIV team, at 5 p.m.