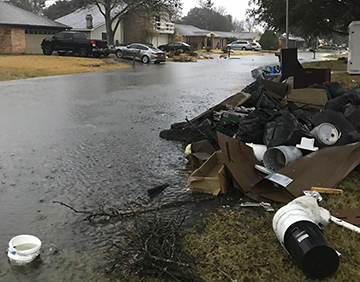 A reader submitted this photo of debris and a flooded street in the Stonegate area of the city. Courtesy photo

Debris removal help on the way

The Governor’s Commission to Rebuild Texas has extended a helping hand to Port Arthur where residents saw flooding, once again, this past weekend.

The help would come in the form of debris removal through the Texas Department of Transportation.

Freeman addressed the issue is a podcast, explaining there is no one person who flips the switch to turn on the pumps; they automatically switch on when the water level reaches a certain level.

“The problem is the debris in ditches blocking outlets and blocking the flow of water,” Freeman said.

Due to this, water began to back up into people’s yards and city crews were out at 5 a.m. Saturday clearing culverts, he said.

One Port Acres family on 67th Street, who declined to give their names, was in the process of sorting through their belongings Monday.

“We had the same amount of rain (in the house) as when Harvey flooded us,” the female occupant said.

Harvey dumped more than 50 inches of rain on the city in late August; Saturday’s storm dumped up to 10 inches.

Debris still litters the sides of the roads five months post-Harvey, something the family believes is a factor in the flooding.

Many areas along 67th Street flooded and water reached into homes where some of those residents had just returned after living in hotels while repairs continued.

“We’re scared every time it rains it will flood,” she said.

The family is giving up on their home, the woman said, and will move where they don’t have to worry about flooding like this again.

Karen Cauthen, who lives in the Stonegate area, did not see flooding on the same level as Harvey. But she said her street flooded so badly she couldn’t drive her truck out of her driveway.

The city’s continuing debris removal problem has come in waves. The state provided $11.2 million to help with debris removal early after Tropical Storm Harvey. The U.S. Army Corps of Engineers estimated there were millions of cubic yards of debris to be picked up and at $10 to $15 per cubic yard, cleanup becomes costly.

Later, debris pickup was paid at a rate of 90 percent federal and 10 percent local; later, the local part of the bill was picked up by the state, allowing for reimbursement for the city’s portion.

As for why the city did not utilize assistance from Rebuild Texas, it all comes down to money. The city already had a contract with Gulf Crowder for three separate passes for debris removal at a time when the debris removal field was very competitive.

The city of Houston saw some of their debris removal contractors leave for Florida where that state was dealing with a hurricane of its own and paying higher prices than Texas.

So the city opted for the contract in hand. Freeman said he did not want to jeopardize the contract the city had with Gulf Crowder for what could possibly be only a one-time pass by TxDOT.

He said he was also worried that Gulf Crowder could move on to other jobs if it had to share the cleanup fees.

Freeman said Gulf Crowder performed its contractual duties, made the three passes and even stayed an additional 10 days for free.

Now, the Gulf Crowder contract is up.

According to information from various Facebook sites, there has been a call for residents affected by the most recent flooding are asked to attend Tuesday morning’s City Council meeting to voice their concerns about drainage and flooding although they are not officially listed to speak on the agenda.

In an agreement between Jefferson County and TxDOT signed Sept. 20, the Emergency Management Council allows the Jefferson County to utilize any stage agency to clear or remove debris or wreckage from public or private land or water if it threatens public health or safety or public or private property in a state of disaster declared by the governor or major disaster declared by the president of the United States.

The agreement shall remain in effect until each party’s obligations under this agreement is fulfilled or until March 31, whichever is earlier.

Each party shall independently apply directly to FEMA for reimbursement for the work that party performed under this agreement in accordance with all federal rules, regulations and procedures.

Once TxDOT notifies the county it has completed a first pass on a county road, the county is responsible for subsequent debris removal from that road.

David Ball contributed to this story.

BEAUMONT — County Judge Jeff Branick made an important announcement at the conclusion of the regular meeting of the Jefferson... read more