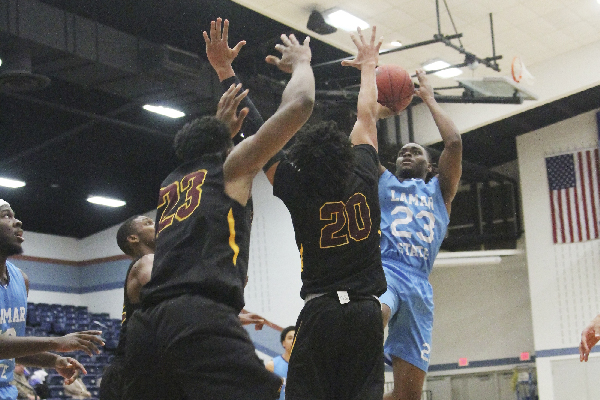 MEN’S BASKETBALL: Another close game gets away from Seahawks

It was another case of oh-so-close, yet-so-far for the Lamar State College Port Arthur Seahawks on Wednesday night.

Coach Lance Madison’s team battled into overtime against one of Region XIV’s top-ranked squads but fell 69-66 in the extra period at the Carl Parker Center.

The Seahawks are 6-10 overall and 0-6 in conference. Four of their Region XIV losses have been by five or fewer points.

“We’ve had a pretty tough season,” said sophomore forward Rodney Brown. “Most of our games have been close and down to the wire. We just have to learn to come together and finish as a team.”

Brown led the Seahawks with 19 points and 13 rebounds, his fourth double-double of the season. LSCPA’s next highest scorers, Travious Grubbs and Stefan Radosavljevic, each scored eight points.

Bossier Parish improved to 13-3 overall, 6-0 in Region XIV, behind 18 points and 16 rebounds from 6-foot-8 sophomore Mubarek Muhammed, one of three double-digit scorers for the Cavaliers.

In overtime, after a 57-all tie at the end of regulation, the visitors followed up Alex Williams’ missed free throw for the Seahawks with a pair of charity tosses by Tim Collins and led the rest of the way.

The Cavs hit 8 of 8 free throws in the extra five-minute period and finished the game 15 of 16 from the stripe. The Seahawks shot a respectable 20 of 24 on free throws but their three more misses than the Cavs spelled the difference.

“Give them credit: they hit their free throws late,” Lance Madison, Seahawks coach, said. “It was a tough game. We just came up short again. We’ve got to execute late.

“We’ll just have to come out with the same purpose and the same focus on Saturday.”

The Seahawks play at Kilgore College Saturday at 4 p.m. Wednesday, Jan. 17, they are at Angelina College in Lufkin at 7:30 p.m. Their next home game is at 4 p.m. Saturday, Jan. 20, against Jacksonville College.

Lamar State took advantage of five quick Cavalier turnovers and led by as many as nine points in the first half, 25-16, late in the first half. But Bossier Parish feasted on some Seahawks miscues to trail by just one, 29-28, at the half.

No team led by more than three points the rest of the way, and there were a total of 11 lead changes after halftime.

The 6-foot-9 Radosavljevic showed some nifty inside moves and banged home a jumper from the free throw circle for three early baskets in building the big early lead.

But the visitors turned three Seahawk turnovers into quick points and grabbed a 28-27 lead with 40 ticks before intermission. LSCPA’s Kolbe Littlefield scored a putback to give the home team a 29-28 halftime lead.

BOYS BASKETBALL: Bulldogs hang on at Reservation after quick start