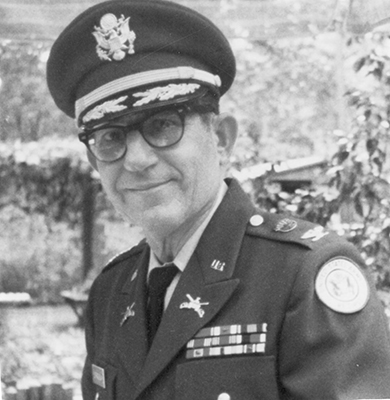 Colonel Charles Siragusa, 89, of Spring, TX, died on 19 November 2017. Colonel Siragusa was born in Houston, Texas on 21 July 1928, to Charles and Mamie Turano Siragusa.
Siragusa attended the following Houston area schools: Thomas Jefferson and Looscan Elementary, Marshall Jr. high and Jefferson Davis high. Siragusa went to work for Southern Pacific Railroad in 1944 and left in 1945 to enter the US Maritime Academy at St. Petersburg, Fl. Leaving the Merchant Marines after serving as an Able Body Seaman on both cargo ships and tankers, in both the Atlantic and Pacific Oceans, Siragusa enlisted in the US Army in 1946. He served in Japan with the 25th Infantry Division and in Germany with the 382nd Military Police Battalion. It was in Bremen, Germany in January 1948 that he met his wife Augusta Henrietta, nicknamed Mudel. They were engaged in September on 1948 and married in Bremen on the 19th of August 1950. With his wife in hand they traveled together on a Military Troop Ship back to the US, disembarking in New York City. Upon returning from overseas duties Siragusa was assigned to the 1st Anti-Aircraft Artillery Recruit Training Battalion serving as a Drill Sergeant and later as the Battalion Operation Sergeant.

Working his way up through the ranks, Siragusa was commissioned a 2nd Lieutenant at Fort Benning, GA in 1953 and assigned to the 1st Armored Division at Fort Hood, TX.

Upon his discharge from active duty 1954, Siragusa returned to Southern Pacific to finish the Machinist Apprenticeship that he had started in 1944. While still at Southern Pacific, Siragusa joined the Texas Army National Guard, becoming a member of the 157th Tank Battalion, 49th Armored Division. In 1956 while still active with the National Guard, Siragusa entered the Houston Postal Service as a Letter Carrier. In 1965 Siragusa transferred from the National Guard to the US Army Reserves, becoming a member of the 75th Maneuver Area Command. Pursuing his postal career and the military, Siragusa advanced to supervision in the Postal Service, and to the rank of Colonel in the military. At the Postal Service, Siragusa served for a number of years as Superintendent of Collection, and was working in the Office of Delivery Growth Management at the time of his retirement in 1984. Siragusa’s 42 years of military service included the regular Army, National Guard, and Army Reserves. While in the military, Siragusa served in many positions of responsibilities, his last being as Chief of Staff for the 75th Maneuver Area Command. Siragusa officially retired from the military in July of 1988. In April of 2001, Colonel Siragusa was inducted into the Infantry Officer Candidate School Hall of Fame located at Fort Benning, Georgia. During Retirement Siragusa volunteered with the Woodlands Memorial Hermann Hospital, Sadler Clinic in the Woodlands, The Community Clinic in Oak Ridge North, and the Meal-on-Wheels program at The Woodlands Friendship Center.

Siragusa was also a member of St. Simon and Jude Catholic Church of The Woodlands, and an active member of the Men’s Club. He was also active for many years in the Eucharistic Ministry, administering Holy Communion to patients at The Woodlands Memorial Hermann Hospital. He was also a member of the Knights of Columbus Bishop Nold Council # 6557 in Spring TX and a Fourth Degree Member of Our Lady of the Pines Assembly 1759 in Conroe, TX. He was a member of the 34th Bomb Group Association, the Military Officers Association for Retired Federal Employees. In April of 2001 Siragusa was honored by being inducted into the Officer Candidate School Hall of Fame at Fort Benning, Ga.
In addition to his volunteer work, Siragusa loved to travel. To see places he had read about but never seen, was his lifelong goal.

Visitation will be held Sunday November 26, 2017 at Forest Park The Woodlands Funeral Home Chapel from 5-9pm with a Rosary/Vigil from 6-7pm. Funeral services will be held Monday, November 27, 2017 at St. Simon and Jude Catholic Church of The Woodlands at 11am.
In lieu of flowers, please consider a donation to Knights of Columbus Council 6557, Scholarship Fund.

Deaths and services for Nov. 25