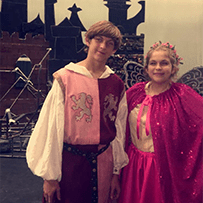 The shows must go on — NHS drama students keeping busy

NEDERLAND — The Nederland High School drama department is having a busy season putting on not only one play, but putting on two plays.

This week, for instance, they are putting on two shows of “Sleeping Beauty” for middle school and elementary school students at the Performing Arts Center at NHS, according to Roxanne Gray, drama teacher.

Likewise, there will be a free public performance at 6 p.m. on Nov. 13 at the Performing Arts Center.

This version of “Sleeping Beauty” is based on the original story that is a French fairytale.

“There are different variations. The original author was Charles Perrault who wrote it in 1697 based on a medieval folk tale,” she said.

In this version, seven little good fairies help Princess Aurora. Some of the play’s scenes though were taken from the Walt Disney motion picture such as Maleficent looking the same as in the movie.

“Children know this story and they can connect,” Gray said. “We patterned some of the costumes from the film and some of the characters.”

One difference is in the original story Sleeping Beauty pricks her finger on the spindle and dies. In this version she pricks her finger and falls asleep until she is wakened by true love’s first kiss from the hero-prince.

Gray said some of the original fairytales are more unsettling and sinister than the sanitized versions audiences are accustomed to.

Though the stories are sanitized, the villains are still frightening such as Maleficent and the evil queen in “Snow White.”

“When Maleficent turns herself into a dragon, she’s pure evil and still quite unsettling. Later Disney villains have a comical element but not Maleficent and the evil queen. It’s interesting how they adapt things,” she said.

Gray said her students had a “very nice time” bringing the play to life because it was recognizable to the audience.

“It’s a familiar story,” she said. “The kids had fun producing it and the audience enjoyed it.”

In addition to thanking the students for their work Gray also thanked co-director Lauren Truss-Hall for her help.

The other play is named “Murder at the Orient Express,” a murder mystery comedy involving 12 suspects at a Chinese restaurant.

Two Irish sisters own the restaurant and the waitress is German.

“They’re all kinds of crazy characters. A private eye is brought in to solve the case,” she said.

Gray said it was purely by coincidence the play would come out the same time as the upcoming movie, “Murder on the Orient Express.”

The play will be at 6 p.m. on Thursday night in the NHS cafeteria. A portion of the cafeteria will be decorated like a Chinese restaurant.

One of the student’s mothers is a caterer and she will serve different and interesting desserts during the intermission. The cost of admission is $10 and tickets can be bought at the door.

Gray said reservations would be helpful so they will know how many desserts to make.