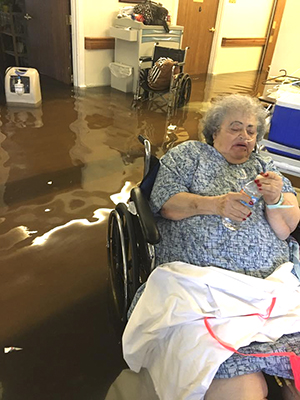 Rosaria Jo LeBoeuf, 77, on the morning of Aug. 30 before she was evacuated from Lake Arthur Place Nursing and Rehabilitation in Port Arthur. There will be a hearing on Sept. 22 in the Jefferson County Courthouse to answer what happened there in the wake of Hurricane Harvey. Courtesy Photo

The daughter of one of the residents rescued from the flooded Lake Arthur Place Nursing and Rehabilitation on Aug. 30 witnessed firsthand the events described in an affidavit that led to a criminal search warrant at the facility on Thursday.

The search warrant, which included an affidavit describing conditions at the nursing home witnessed by Port Arthur Police Det. Mike Hebert, accuses the nursing home’s director, Jeff Rosetta, of being criminally negligent when he failed to evacuate residents.

Tonya Petix said her mother, Rosaria Jo LeBoeuf, 77, was among the resident rescued from the flooded facility.

When Petix and her husband made it to Lake Arthur on Aug. 30, the smell was horrific, she said. She found her mother, who suffers from a number of health issues, sitting in a wheelchair in a flooded hallway.

“It was a horrific scene; it was deplorable,” Petix said.

Petix said she couldn’t get a satisfactory answer from Director Jeff Rosetta as to why the patients had not been evacuated. The director told her the National Guard was on the way, she said.

While waiting for evacuation, Petix said, she used social media to ask for help. Several people in boats appeared, but the administration turned them away and became “belligerent.”

According to the affidavit descripting what Hebert witnessed, Rosetta called Hebert a “fake cop.” Hebert eventually handcuffed the administrator, the affidavit states.

“Mike Hebert took control of the situation,” Petix said. “He got everyone out and staged them at the Port Arthur Little Theater (on Jimmy Johnson Boulevard near Twin City Highway),” she said. “Everyone was wet. They had no medications.”

It was there that the evacuated residents began receiving medical attention before being transferred to another nursing facility.

Petix said her husband was advised that night that the family could file an online complaint about Lark Arthur Place. However, they did not have access to a computer.

Since then, Petix and some other families with patients in Lake Arthur Place have hired attorney Jill Pierce with the law firm of Bradley, Steele & Pierce of Port Arthur. Petix filed for and was granted a temporary restraining order that prevented owners and manager from removing evidence before the criminal search warrant was executed this past week.

“With how high the water got at the facility we don’t want them saying we lost our computers and servers. They were destroyed while communicating with their corporate office in Dallas,” the attorney, Pierce said. “Several other families from Lake Arthur Place and from Cypress Glen (on Ninth Avenue in Port Arthur) have the same issues that they should had gotten the people out.”

Pierce believes after seeing how hard Hurricane Harvey hit Houston Lake Arthur should had then instituted a plan to evacuate to a sister facility in Corsicana.

“They told families this before (about evacuating to East Texas),” she said. “Monday morning before lunch they couldn’t use the sewer. Several rescue volunteers filed their own complaints with the (Texas) Department of Health and Human Services to investigate.”

But Andrew Kerr, president of Senior Care Centers, which owns Lake Arthur Place, said in a statement that residents were “forcibly evacuated by unknown volunteers.”

He said that Lake Arthur officials were in constant contact with the Port Arthur Fire Department and the Texas Department of Aging and Disability Services beginning Aug. 29, and were told to expect an evacuation by the National Guard. That did not take place due to worsening conditions, the statement said.

“Members of our care team packed medicine, food, water and other supplies on the boats. We attempted to accompany the residents as they were evacuated to ensure their safety and maintain knowledge of their whereabouts, but were separated from them during the evacuation process,” Kerr wrote.

The statement also said, “We stand firmly behind our care team for their heroic efforts to safely evacuate our patients and residents amidst the chaotic and unforeseen conditions of the storm last week.”

To date, no charges have been filed in the case.

Judge Baylor Wortham has scheduled a hearing on the temporary restraining order for 9 a.m. on Fri., Sept. 22.

Tents arrive just in time for some

By Jesse Wright Jesse.wright@panews.com   Friday night 250 people slept easier. The evacuees who had been sheltering at Thomas Jefferson... read more