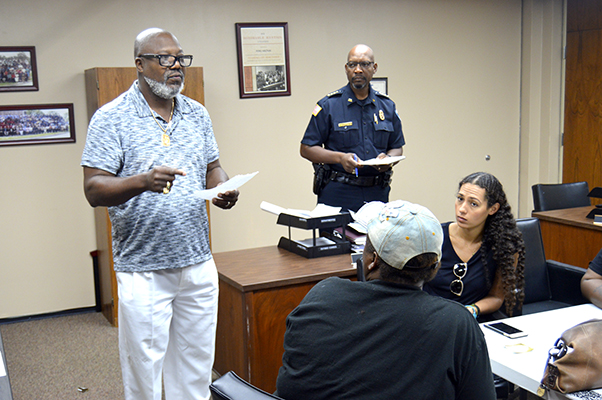 Protesters took to the streets of Downtown Port Arthur Tuesday as residents voiced their concerns over having no place to live. The event culminated on the fourth floor of City Hall with a police presence and assurances of both short-term and long-term solutions for displaced residents.

The protest was organized by Hilton Kelley in an effort to call attention to and seek shelter for all those evicted from their homes due to damages sustained from Hurricane Harvey. Kelley is the executive director and founder of Community In-Power and Development Association Inc. (CIDA), an environmental non-profit.

“We fight against injustices, both social and environmental,” Michelle Smith, marketing director for CIDA, said.

As the press release given out by the organization states: “Hundreds of families with young children and the elderly have been unlawfully evicted from apartment complexes.”

“These people have been given eviction notices with only a few days to get out,” Smith said. “Some have been evacuated to Dallas and have no chance to even get back to their homes in the two-to-five day time period they’d been given.

“They have no place to stay.”

The reason cited for some evictions was a health concern over mold and water damage, according to some of the displaced residents at CIDA on Austin Avenue. However, many of them said there were still salvageable spots to live in their complexes.

“I was basically given five days to vacate the apartments,” Tandolon Scypion, former tenant at an apartment complex on FM 365, said. “It was a termination of my lease without any option to be housed.

“When I asked them (landlord) where I was supposed to go, their response was: ‘I don’t know.’”

Scypion said she is currently staying with her mother, but longs for a place to call her own again.

“They’re saying the unit was non-liveable… but I could have salvaged things (and moved) on to the second floor,” she said.

Smith said tenants on the second floor with no water damage were still evicted.

“We already contacted (Rep.) Randy Weber to show pictures and copies of the eviction notices,” Kelley said. “There are certain rules that must be followed… and what about emergency housing? It’s dangerous to sleep out in the elements. Folks have nowhere to go.”

Kelley said he has also attempted to get in touch with Port Arthur city manager Brian McDougal and mayor Derrick Freeman; but neither of them had gotten back with him. As a result, Kelley said officials would likely listen better if they came knocking on their doors.

Kelley led a protest group of about 10 people down Austin Avenue to City Hall. They went up to the fourth floor where the city manager’s office was located. Among other slogans, Kelley yelled: “We need houses. We need it now. Babies are in the streets.”

With the collection of people behind him, he went into the office of the executive secretary for McDougal and demanded to see the city manager or the mayor.

“I have not heard from Freeman or the city manager…” Kelley said. “Something’s wrong when officials don’t come out to speak with these people.”

Shortly thereafter, officers with Port Arthur Police Department arrived on scene, including chief of police Patrick Melvin. The number of officers that ultimately appeared equaled or surpassed the number of protesters.

Melvin and other officers spoke with Kelley behind closed doors, saying it was a police matter and not a public protest. Afterward, officers let media into the room.

Kelley addressed protesters, saying officials had contacted the mayor and made arrangements for evicted individuals.

“FEMA has just relocated money for our city,” Kelley said. “They’re holding it on a federal level.”

He iterated that displaced residents should file online at disasterassistance.gov for long-term assistance with living arrangements, claims and other needs.

“You could wash, eat and stay there until more permanent housing is effected,” Kelley said.

Kelley called the assistance “great news” and said residents would just need to hold out for 48 hours longer until the barges were set up.

“We do everything we can,” Kelley said. “Yes, the mayor hasn’t been visible, but they’re working behind the scenes.

“We have gotten some reprieve, some hope, some relief.”

Port Arthur public information officer LaRisa Carpenter was not able to comment on any details regarding the barges by deadline.