Y staff work to get back on track; volunteers, donations needed 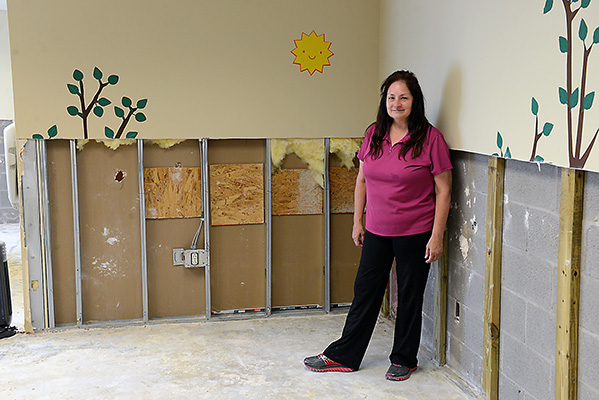 Kathy Pollock, membership director for the YMCA of Southeast Texas, shows flood damage in the nursery.

For The Port Arthur News

Bud Oliver, director of the YMCA of Southeast Texas, boated up to the Port Arthur branch on Ninth Avenue Sept. 1or Sept. 2, after the rains came. It’s hard to remember exactly which day when everything was flooding and nothing was happening when it was supposed to.

“We’re drying out. We got lucky, I think. We’re on kind of a high point here,” Oliver said Monday afternoon in his office, which had been stripped of most furnishing and carpet. The bottom two feet of drywall had been removed from his wall.

But there was work to be done and Oliver and a number of his staffers had a goal of opening as much of the facility as possible for members to use.

“The staff has really stepped up,” he said. “Especially the after-school staff. It’s some young kids. They were here as soon as we could get here.”

“I’m guessing we got between two and six inches in the building. We got very lucky because the gym floor didn’t get anything. The racquetball courts are good. And the pool,” he said, identifying the areas that could be opened first.

“We opened the pool today, and the locker rooms. That’s something. Then we hope probably this week we’ll open everything except the wellness area,” he said. The wellness area is what they call the area with the weight machines and other workout equipment such as elliptical machines and stationary bicycles.

The machines were OK but they had to pull up all the floors and all the carpet.

“The nursery took a real big hit, also, so we’ve got to get all new toys because they were on the floor and the flood waters got them all,” he said.

The message Oliver had for Y members is to be patient, to support the Y.

“We’ve been financially struggling for the last couple of years. Any time we don’t have any revenue coming in, it’s bad for us. If members cancel, or we get a lot of that, it could be tough for us,” he said.

We definitely need volunteers to just clean up, he said. Anyone who knows how to install drywall would be a great help. They also need help moving equipment.

“The insurance guy was here yesterday and I walked through with him. He said it’s probably going to be two months before you see anything,” he said.

A helping hand and a safe place to stay