Library to remain closed for months 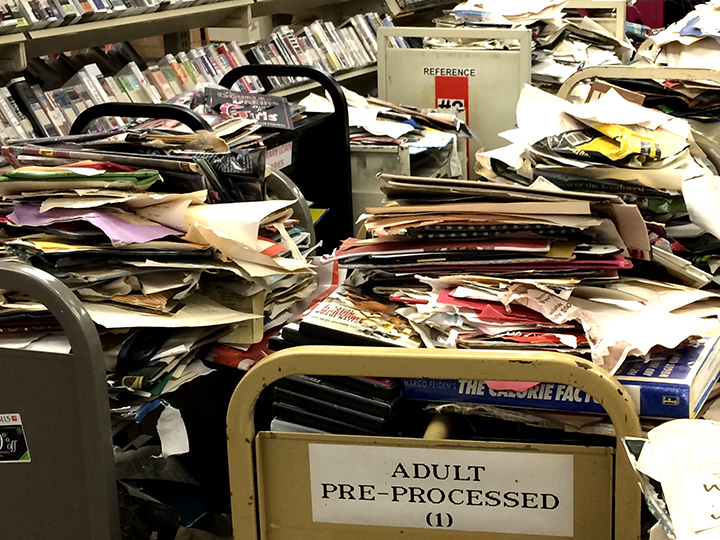 The heart of a community beyond its people is arguably its library. It could serve as a place of education, a place of meeting, a place of people and much more. That’s why when a community loses its library—even if only for a little while—it could be devastating to the city as a whole.

The Port Arthur Public Library was one of many buildings hit hard by Harvey. It sustained flood damage and the subsequent mold issue inundated buildings often face afterward. It also sustained substantial damage and loss of property of its books, computer equipment, archives and more.

However, as director Jose Martinez insisted Tuesday, the library will reopen—just not anytime soon.

“We will hopefully reopen by the end of the year,” Martinez said, careful not to give an exact date until the extent of the damages and reparations could be determined. “It all depends on the cleanup process.”

Martinez and some of the senior staff came back to the library as soon as it was safe and possible.

“The floodwaters got up to about three or four feet,” Martinez said, indicating a distinct water line that ran along the walls and shelves of the building. Whatever was placed on the bottom two shelves was ruined and had to be thrown out.

And as the scores of refuse piles filled with electronics, books, magazines and DVDs could attest, there was a lot to be thrown away whether it was on the bottom shelves or not.

Steven Williams, assistant director, estimated the losses to be in the millions of dollars; Martinez called it “incalculable.”

“It’s because of everything,” Williams said. “The books, the infrastructure, the equipment, the servers, the AC.”

One of the costlier processes was the freeze-drying of irreplaceable items like genealogy records, microfilm, Port Arthur historical photos and collections. The intent, as performed by companies contracted by the city, was to prevent any further damage from taking place, kill the bacteria that’s present and preserve the items long enough for a transference of information by experts.

“It’s one of our highest priorities,” Williams said. “It’s time sensitive, and it has to happen now… We have to preserve it now.”

Still, as Martinez pointed out, everything is of a timely nature.

Martinez said even the books on the top shelves were in danger because the books “are like tissue paper; they soak up the humidity.”

Accordingly, the gigantic machine fitted at the front entrance of the library was designed to soak up the water and dry the air inside. Williams said the machine had been set up and doing its job since Sunday. Both he and Martinez did not know how much longer it would need to be there. Martinez only agreed it was not going to be a short process.

Martinez emphasized the importance of not only the items inside the library, but what the library represented to the community.

“A lot of people use the library for community meetings and classes,” he said. “The library is very well used, and we’re glad it is.”

“We’re basically the hub when the community meets,” Williams said. “We have education classes, citizenship classes, computer classes and more. We even have yoga classes.”

According to Williams, the library was also a place for people who normally didn’t have access to computers to use computers and the internet, and do things like look for jobs and apply online.

“It’s a place of stability where people could find peace,” he said.

Martinez agreed, saying people used the technology to write resumes and communicate with others.

“There’s usually something for everyone,” Martinez said.

According to Williams, every year for the past five years, the Port Arthur Public Library has averaged 125,000 to 130,000 active users who have used the library.

When speaking of the loss and of the amount of time it would take before the library could be reopened, Williams was frank in his views.

“It’s going to be a big loss for all Port Arthur citizens.”