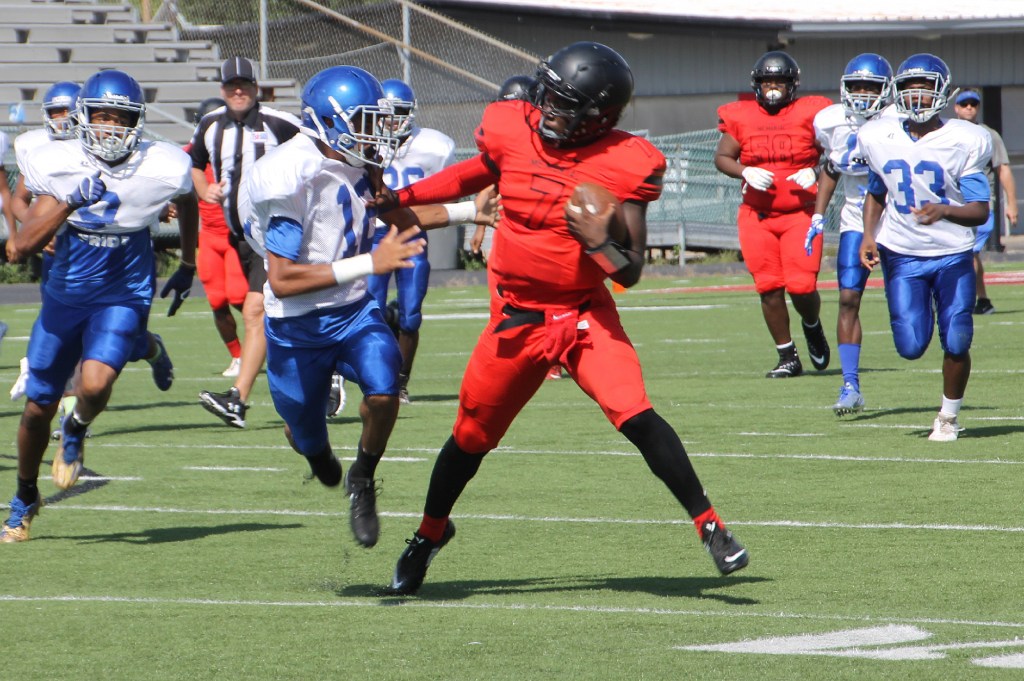 Keitha Jones danced off two hits and finally found his opening. He darted through the hole 65 yards to the Baytown Sterling 5 … only for a penalty to reduce the run to 20 yards.

But Jones’ moves were proof positive Port Arthur Memorial’s offense is in good hands with the SMU verbal commit.

“I really worked hard on trying to get stronger so I can be physical and take more hits at that position,” Jones said. “At the quarterback position, you’re liable to take more hits.”

He also didn’t mind wearing the same red jersey as every other Titan. Quarterbacks typically wear a different color in practice to indicate they are not to be tackled.

“I wanted it to feel like a real game,” he said.

During one of the sunniest days of preseason camp, Jones and the Titans’ offense put heat on its former District 21-6A rival during an entirely scripted Friday morning scrimmage at Memorial Stadium. No official score was kept, but Memorial outscored Sterling 20-7.

Titans coach Kenny Harrison left the nearly 2-hour workout concerned about the Titans’ conditioning. The temperature in Port Arthur reached 92 by noon, making it much hotter on the artificial turf.

“It’s good that we came out and competed at 10 a.m. in the heat against a different opponent,” Harrison said. “Not bad for a first scrimmage. The most important thing we have to do is get ourselves in some shape. We can’t use 10 or 11 o’clock in the morning as an excuse. We’ve got to be prepared. But like I said, we had a lot of good things happen. The good thing about today was that everything’s correctable.”

The Titans’ defense came up with plenty of what would be three-and-out stops in regular play, but the 10- and 12-play scripted series allowed the Rangers to continue and come up with some big plays. A Sterling running back broke three missed tackles on a 48-yard touchdown run against the Memorial first-team defense.

“There were some mental breakdowns on our part that we have to correct,” Harrison said.

Memorial safety Javonte Butler-Hopkins did pick off a pass that was not returnable under the scrimmage guidelines.

Jones, however, showed his strength carrying the football. The former wide receiver stiff-armed a defender on a 28-yard carry on the Titans’ first offensive series.

Fellow senior Elijah Hines, who plans to sign with Louisiana Tech, broke runs of 12 and 5 yards and finished the drive with a 24-yard scamper.

“Hopefully, we can keep him fresh throughout the year with some much added depth at the running back position, and we have some guys who did a tremendous job today,” Harrison said.

That same series, Jones completed a 40-yard strike to James Francis, who coughed up the ball just as he was tackled and lost the fumble to the Rangers.

Ladia snuck in from a yard out later in the scrimmage.

Harrison said the offensive line, which returns only two starters from 2016, is gradually starting to come together. That was a key focus of his in the scrimmage.