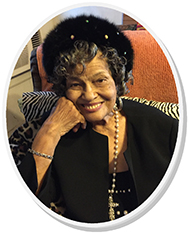 Mrs. Gladys Charles, lifelong resident of Port Arthur, Texas, passed away in her home on Saturday, July 29, 2017. She was primarily a mother and housewife, but worked for brief periods at Blanton Cleaners and Luby’s in Jefferson City Shopping Mall. She was a Catholic by faith and graduate of Sacred Heart High School. She was active in the Jill’s Social Club for many years, where she served as President and Secretary during her membership. She was also a member of the Seamen’s Wives’ Civic & Social Club.