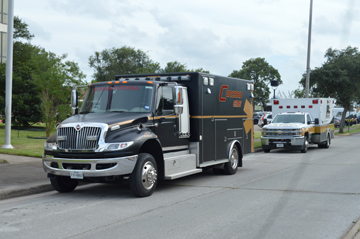 A Concord EMS ambulance and an Acadian ambulance were lline outside the Port Arthur City Hall on Tuesday night.

The decision to add a second ambulance provider in the city of Port Arthur is still in limbo.

The Port Arthur City Council voted to remove a resolution to approve the application of Concord EMS of Houston for an ambulance agreement to operate within the city of Port Arthur at their regular meeting on Tuesday night. Acadian Ambulance is currently the sole EMS provider in the city since 2010.

Concord’s application is still pending and the resolution could be placed on a future city council agenda.

A public hearing was held prior to the vote and several spoke in favor of Acadian’s performance.

Mary Ann Goudeau Reid, community relations supervisor for Acadian, spoke first. She said she was taught to serve her community from her parents. She and her husband, Robert, also taught their children those values.

The company is employee owned — an Employee Stock Ownership Plan (ESOP). In fact, there were around 20 Acadian employees in the audience.

“I want you (the city council) to know the faces of the people (Acadian employees) who are here every day,” she said. “We serve the community and we work as a family.

“With a second provider, the response times are a concern for the citizens. We take care of everybody we’re supposed to take care of.”

He said one ambulance service in the city will be held accountable and two services didn’t work well seven years ago.

“The two systems will increase response times. There used to be tons of complaints. Now, we haven’t heard anything.”

Seven years ago, Burney said Acadian could only field half of the units they now have as it wasn’t profitable for them.

He said he spoken with some residents who are under the impression more than one service will create a price war. Burney said that won’t drawdown prices because Medicaid and Medicare dictate the prices.

“We work hard to resolve any issues we have and we’re one ambulance service willing to be held accountable.”

Resident Geraldine Hunt said if something is not broken don’t fix it.

“Leave it alone. I like one service provider. I like it’s an ESOP and a lot of them live in our community,” Hunt said.

Fellow resident Warren Field said he lived through “the chaos of having two or three services in the city.”

He added that Acadian is a Port Arthur business and “we support them.”

Concord also has branches in Dallas, Sugarland and Pasadena.

The company is tentatively looking at setting up shop at the old fire station at Memorial Boulevard and 32nd Street as a base of operations in Port Arthur. If that falls through, they may move into a facility on Gulfway Street that once housed Gold Star and Metro EMS.

John Clingaman, operations manager with Acadian Ambulance, said the city’s ordinance requires an ambulance provider be on the scene by eight minutes and Acadian has met that benchmark 90 percent of the time. They also fall within a 10 percent cushion for not making it within the eight-minute threshold.

In addition, Clingaman said he meets with local fire chiefs, emergency management coordinators and other entities on a monthly basis about meeting quality improvement and they are involved in the community.