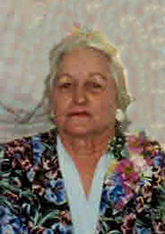 She was born on October 11, 1930 to her parents, Louis Baer and Jeanne Caillouet Baer in Rayne, Louisiana. Jo Ann has been a resident of the area for most of her life. She retired as owner and operator of Ed’s Bar-B-Que. She served in the U. S. Air Force. Jo Ann was affiliated with St. Joseph Catholic Church.

She was preceded in death by her parents, three sisters and four brothers and her husband, Oray George Rodrigue.

Jo Ann is survived by her two sons, Michael Rodrigue of Port Arthur, Patrick Rodrigue and his wife, Cathy of Austin, Texas, her three daughters, Joan Rodrigue Cormier of Austin, Texas, Debra Doroin and her husband, David of Groves, Evelina Warren and her husband, Bruce of Austin, Texas, her six grandchildren, James Cormier, Christine Cormier Do, Meredith Warren, Olivia Warren, Emma Rodrigue and Jack Rodrigue. She is also survived by her two sisters, Yvonne Gary of Trinity, Texas, Kay Weidner of Aubrey, Texas and her brother, Max Baer of Gonzales, Louisiana, along with numerous nieces and nephews, great nieces and nephews.