Year of the Titan? Defense, skill players give Harrison confidence in state chase 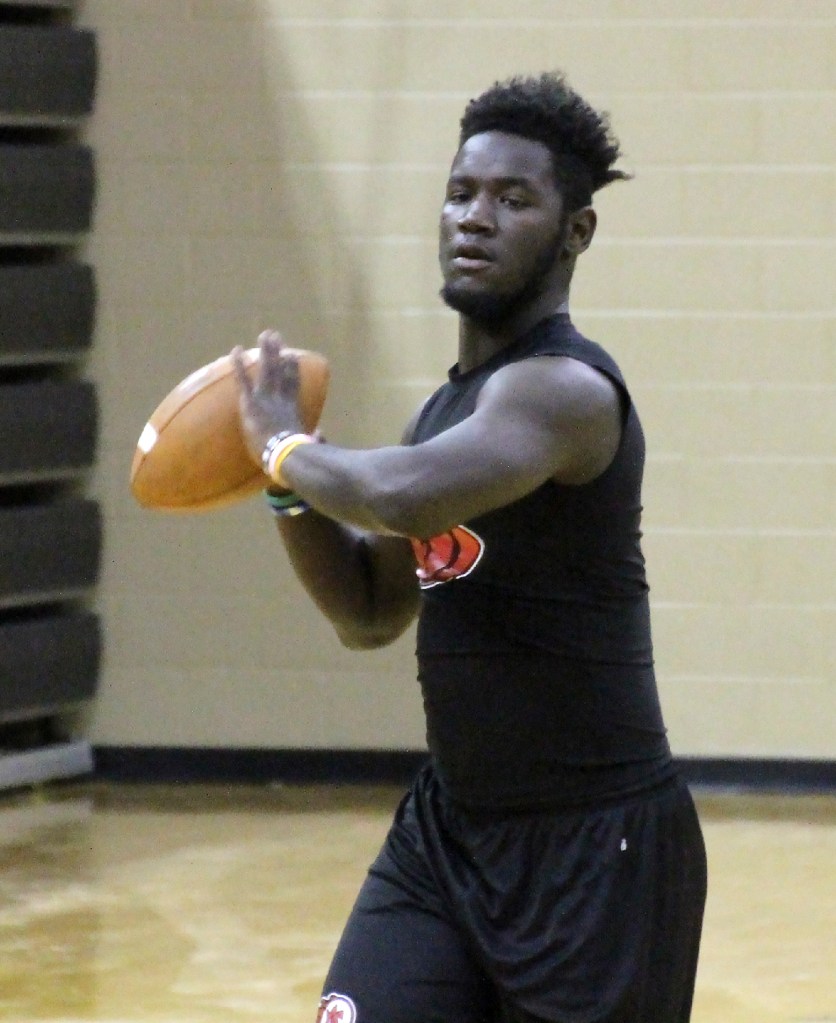 Keitha Jones of Memorial does throwing drills during practice inside the main gymnasium on Tuesday. (I.C. Murrell/The News)

Kenny Harrison warned the Port Arthur Memorial students during February’s National Signing Day assembly watch out for the 2017 football team.
He believes, as strongly as he did then, this is the team that can go all six playoff rounds and win a 5A Division I title, which would be the school’s first state crown for an athletic team. Memorial won a share of the District 22-5A title last year, its first in the Jefferson County-centric league.
He credits his defense and skill players in large part for his strong confidence.
“Our defense is pretty good,” the ninth-year head coach said, his best finish a state semifinal appearance with now-Patriots linebacker Elandon Roberts in 2011. “We have quite a few kids back on defense, in addition with Keitha Jones moving over to quarterback and Elijah Hines at tailback and being able to control the ball. I say those two guys and defense are what gives us a lot of confidence at this time.”
Jones and Hines made headlines in recent weeks with their oral commitments to nearby Football Bowl Subdivision teams. Jones, who was a wide receiver last year and started a few games under center as a sophomore, has been recruited by SMU as an athlete. Hines, The News’ 2016 Offensive Player of the Year, expects to sign with Louisiana Tech.
Under new NCAA rules, both can sign as early as December.
Harrison said Jones, who has grown from last year’s 6-foot-1, 185-pound frame, is in his best shape ever.
“I actually put in a lot of work to be bigger and stronger, just so I can be ready for the season and be more physical,” Jones said.
Without a doubt, Jones is the successor to current Louisiana-Lafayette freshman Kadon Harrison as the Titans’ starting quarterback. Jones saw some action late in the 2015 season when the younger Harrison was injured.
“I just take the leadership role and I accept it,” Jones said. “I lead the team the best way I can.”
Defenses will already have their hands full with Hines, the 5-foot-9, 170-pound tailback who 1,661 yards and 21 touchdowns rushing. With Louisiana Tech awaiting his services for 2018, Hines said: “I’ll have to work harder and do what I have to do.”
Jones is looking forward to a better year from Hines, who missed Memorial’s Region III semifinal loss to Temple with a shoulder injury.
“I’m looking for him to have a better year than last year,” Jones said. “He’s coming off injury, so he does have something to prove, and I feel like we just have to watch.”
Memorial worked out in its main gymnasium Tuesday morning after heavy rain took its toll on the practice fields, but Harrison was happy with the way the Titans retained information and instruction from the spring and their conditioning.
“It was wonderful,” Hines said. “Everybody was getting after it, getting along.
Senior defensive end Braydon Williams likes the pace of drills.
“We’re moving around fast, things are going fast,” he said. “We’re coming out and setting the tone.”
•
I.C. Murrell: 721-2435. Twitter: @ICMurrellPANews