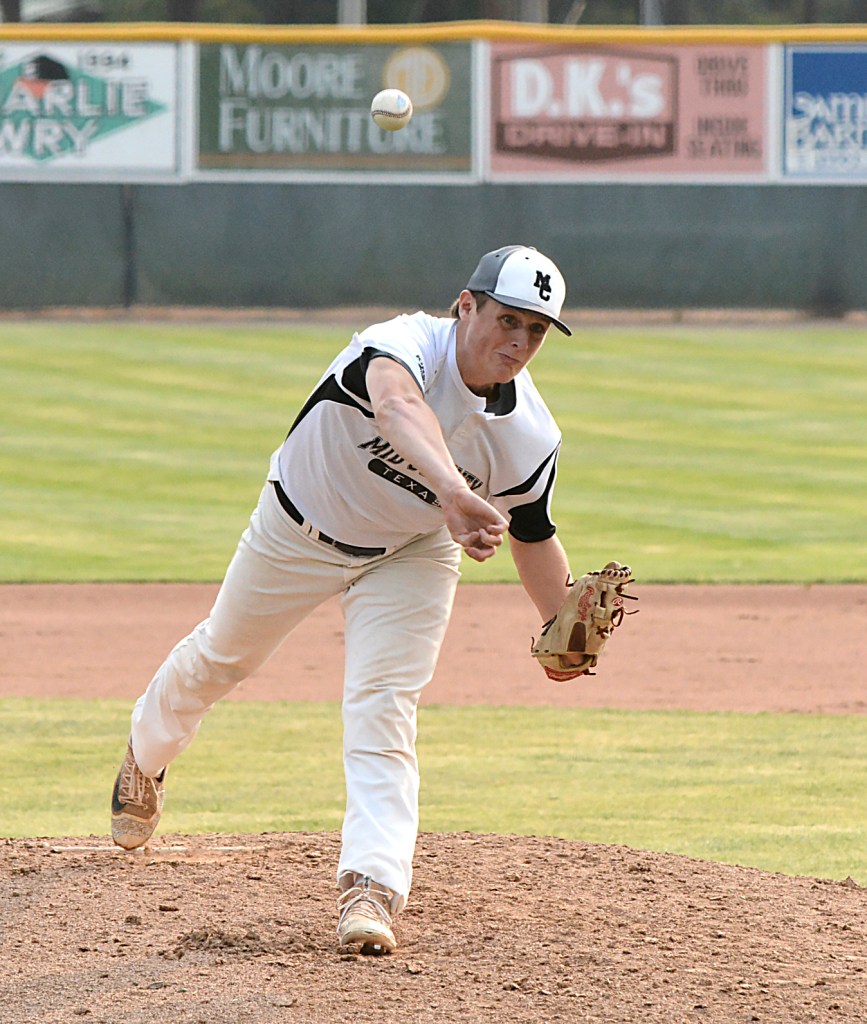 Brandon Morse of Mid-County hurls a pitch against Moses Lake on Saturday in a Babe Ruth World Series game in Ephrata, Wash. (Steven Smith/Special to The News)

“This was the worst game we’ve ever played,” said the manager of the Mid-County Senior Babe Ruth team after the Texans survived the opening round of the 2017 World Series at Johnson-O’Brien Stadium. After falling behind the Moses Lake (Washington) River Dogs, MC rallied with three runs in the bottom of the sixth inning for a 4-2 win.

Rogers’ dismay over his team’s performance didn’t include pitcher Brandon Morse, who limited Moses Lake to three hits while recording 11 strikeouts. But he gave up two of those hits in the third inning, the MC defense committed two errors, and for a few innings Moses Lake was clinging to a 2-1 lead.

“I’ve never seen us throw two balls away like that,” Rogers said. “Hey, I give Moses Lake credit. They did what they needed to do.

The Texas club got the early lead, sliding out to a 1-0 edge in the first inning when Kody Kolb drew a game-opening walk, got to second on a groundball by Logan LeJeune and scored on scored on a base hit by Chase Kemp. But the third inning collapsed started when Moses Lake’s Dax Lindgren drew a walk, Jeff Sonneman hit a single and Emmitt Tatum followed with a base hit that brought in Lindgren – MC’s first error allowed Sonneman to score what was the go-ahead run.

The Dogs threatened to add to their lead in the fifth inning by getting runners to second and third, but Morse struck out two batters to end the inning. But Mid-County couldn’t get the offense back on track through the middle innings, managing just three baserunners in four frames.

That all ended in the bottom of the sixth, which opened with Kolb getting hit by a pitch – LeJeune followed with a single, and Kemp drew a walk to load the bases. Zach Friesz followed with a deep sacrifice fly to centerfield that brought in Kolb with the tying run, and when the Dogs overthrew third base on the play, LeJeune raced home with what would be the winning tally.

Mid-County was back in action at 1 p.m. Central today against Primetime Baseball of Vancouver, Washington, then get a day off on Monday. They’ll finish pool play with games Blue Lick, Kentucky, on Monday and Tucson, Arizona, on Tuesday.