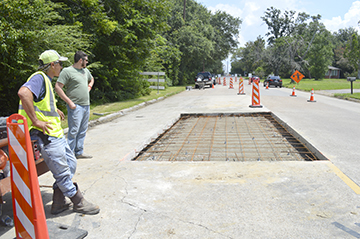 Alan Young, left, with Excavation and Construction, speaks with Nathan Jordan of Soutex Surveyors and Engineers on Merriman Street during a brief break on Thursday. The road work project on the busy street is expected to be completed before the new school year begins. Mary Meaux/The News

PORT NECHES — Roadwork on a section of Merriman Street is moving along and expected to be completed before the start of the new school year.

Port Neches City Manager Andrè Wimer said the project includes replacing certain sections of concrete on Merriman, which is essentially the continuation of a project from a few years ago.

Funding for the project comes from bonds issued last year. The total bond issue was approximately $7.25 million for work at the wastewater plant, water treatment plant, water and sewer line replacement, renovation of the police station and street work. The potion earmarked for the street work comes in at $422,553.55. 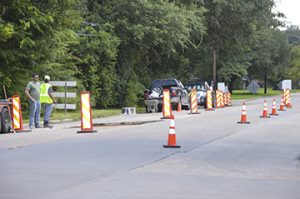 Motorists may have noticed that sections of Merriman, especially near Ridgewood School, were uneven. The intent of this portion of the project is to fix those sections that are in most need of repair.