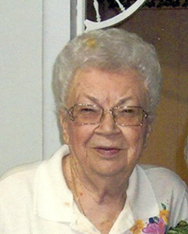 Polly was born February 8, 1925 in Nacogdoches County, Texas to P.D. and Lois Fore. She was a longtime area resident and was known for her cooking, especially her pies, cakes and cookies. She loved flowers and plants and had a “Green Thumb”.

Polly was licensed as a beautician in 1958 and opened her own beauty shop Polly’s Beauty Box retiring in 2006. She had previously worked at Granger’s Seafood in Sabine Pass and Al’s Seafood in Groves as a waitress.

She was preceded in death by her husband of 52 years, Edmond J. “Andy” Anderson; and two sisters, Augusta and Joyce.

Survivors include her friends, Richard and Lisa Hicks, Pat and Salvador Sierra; and nephew, Glenn Dolese and wife Lee.

A visitation for family and friends will begin at 12 noon on Tuesday, July 25, 2017 at Levingston Funeral in Groves, followed by the funeral service at 2:00 p.m. Burial will be at Mount Vernon Cemetery.