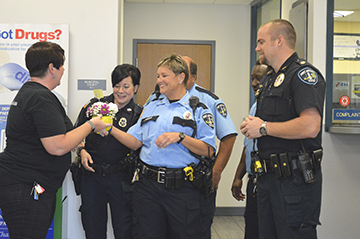 Port Arthur Police Officer Wendy Billiot, center, reacts to receiving a Be Happy Bouquet from Allie Meaux of Williams Florist at the police station Monday. The florist donated 180 of the smiley face mugs and flower arrangement to the department. Mary Meaux/The News

There were a lot of smiling faces at Port Arthur Police Department Monday morning.

The reason was a visit by Williams Florist who donated 180 bright yellow mugs filled with colorful flowers as part of Teleflora’s Make Someone Smile Week.

Alli Meaux with Williams Florist said this is their third year to participate. After the stop at PAPD they have plans to head over to Nederland and Port Neches police departments then to Lake Arthur Place Nursing and Rehabilitation this week. 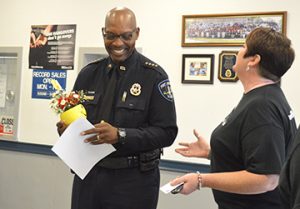 Port Arthur Police Chief Patrick Melvin, left, breaks out in a smile after receiving a Be Happy Bouquet from Allie Meaux, right, of Williams Florist at the police station Monday.
Mary Meaux/The News

PAPD Maj. Cory Cole and Chief Patrick Melvin, among other officers and employees, had a big smile on their faces as they held their smiley face cups.

“This is great of them to come out and show support,” Cole said. “These guys have a stressful job and this means a lot to them – plus it made me laugh.” 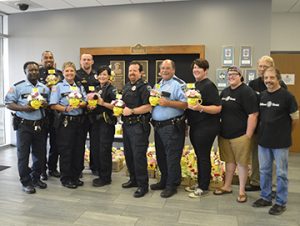 Port Arthur Police Officers pose for a photo with employees of Williams Florists after the business donated 180 smiley face mugs and flower arrangements to the department on Monday.
Mary Meaux/The News

Melvin looked at the plethora of cups and chose one with red flowers.

“I’m happy you guys thought of us,” Melvin said to Meaux and the other employees of the Groves floral shop. “You see all those smiles? This is a great community outreach.”

Williams Florist will be donating and delivering more than 500 smiley cups this year. The flowers were donated by Johnson’s Wholesale.

Teleflora’s Make Someone Smile Week runs from July 16 through July 22.

Local florists and volunteers will deliver more than 30,000 Teleflora’s Be Happy Bouquets to people across the U.S. this week, according to information rom Teleflora.

For the past 17 years, Teleflora has donated the iconic yellow mugs to thousands of participating florists nationwide. To make the bouquets complete, those florists, in turn, donate their time and talents while many local wholesalers and growers contribute flowers.