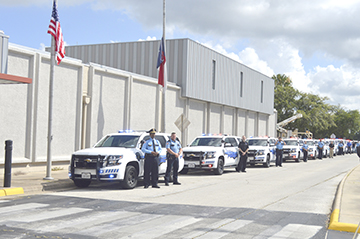 On Friday, members of the Port Arthur law enforcement community came together in support of their colleagues in Dallas who were shot in the line of duty a year ago. Mary Meaux/The News

Red and blue police lights flashed from more than 20 Port Arthur Police patrol cars lined up in front of the police station as flags were flown at half-mast creating a somber mood Friday morning.

PAPD joined officers across the State of Texas who, at 10 a.m., turned on the lights on their patrol cars for one minute commemorating the one-year anniversary of the deadly ambush and killing of five officers, four with the Dallas Police Department and one a Dallas Area Rapid Transit officer. 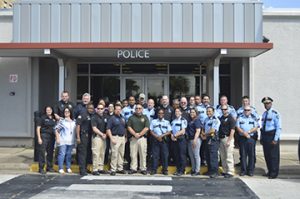 The call to stand with law enforcement came from Texas Gov. Greg Abbott.

“It is our officers who stand between us and all that threatens, and we must stand behind them by sending a clear message that attacks on our men and women in blue will not be tolerated. I ask that all Texans come together to show our appreciation for those who keep us safe,” Gov. Abbott said in a press release.

Port Arthur Police Chief Patrick Melvin said the gesture is a way to show respect to first responders and those who lost their lives in the line of duty.

“Regardless of where you are in the country, regardless of which department you protect and serve for, when you lose a fellow colleague in the line of duty, it always affects you personally,” Melvin said. “This is not just a job, it’s a calling, I call it my ministry.  When you lose a colleague, it reminds you how important family is, friends are and your fellow peace officers.  When the community, fellow workers throughout the city, city management and council come out to support us on days like today, it makes it that much easier to come to work the next day knowing that it could be our last.”

One of the Dallas victims was Sgt. Michael Smith, a Port Arthur native and graduate of Thomas Jefferson High School. Smith was a veteran officer with 27 years of service during which time he received 85 commendations and awards.

Lt. Gov. Dan Patrick issued a statement in honor of all Texas law enforcement officers killed in the line of duty.

“July 7 marks the solemn anniversary of the tragic loss of five law enforcement officers in Dallas,” Patrick said. “That was a dark day for Texas and for all America. Going forward, Texas has set aside July 7 to honor those law enforcement officers and every first responder who has laid down their life to protect their community. Today, we join with their families in prayer and remembrance. We honor their service and the ultimate sacrifice they made. We will never forget.”

Locally, there have been a number of officers killed in the line of duty.

From the Port Arthur Police Department:

From the Beaumont Police Department:

From the Texas Parks and Wildlife Department: