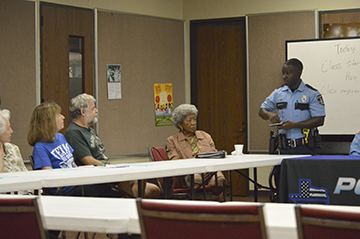 Officer Jonathan Green takes down some information during Saturday’s “Chat with the Chief.” Lorenzo Salinas/The News

Port Arthur police and Port Arthur citizens gathered Saturday morning at the Port Arthur Public Library to have a “Chat with the Chief” with PAPD Chief Patrick Melvin.

“Our agenda is, there is no agenda,” Melvin said. “We’re being proactive in the community.”

Melvin described the department’s new direction in community partnership and interaction through an acronym for PAPD.

“P” stands for “proactive,” by which Melvin said the department puts up covert cameras in certain neighborhoods to track instances of gunshots and drug deals.

“A” was for “accountability,” which Melvin stressed for both the community and for the police department.

“P” stands for “professional,” by which Melvin explained the department is applying for national accreditation, updating its policies and going fully electronic.

“D” relates to “dedicated,” and Melvin said the department is dedicated toward public service.

Melvin then expressed enthusiasm at the prospect of having new cadets entering the police academy at Lamar Institute of Technology in Beaumont.

“We have five, maybe six, people starting next month in the police academy,” he said. “It’s 20 weeks long, and hopefully we’ll have five more officers by December.”

In discussing the background process that includes psychological evaluations and polygraph tests, Melvin said the process was “very rigorous” and “very selective.”

In fact, according to him, 75 percent of applicants in the process do not even get approved.

“We’re not taking just anyone,” Melvin said. “It’s all about fit and who’s the best fit for us.”

Deputy Chief and Division Commander Major Michael Fratus said the department has modified the process so potential applicants could apply any time and the department would start processing their applications without delay.

“It’s a fast-track so people won’t have to wait for civil service exams,” Fratus said, before integrating that applicants would go through the same rigorous process Melvin had mentioned.

Melvin addressed other topics such as the department openings in dispatch and evidence, PAPD’s Criminal Informant program, chaplain services for officers-in-need and the possible creation of a Police Chief Youth Advisory Committee to go along with the already established PCAC appointed by city council.

Melvin also mentioned his desire to create the Police Explorer Program for Port Arthur that would help prepare people aged 14 to 20 learn about public safety and possibly enter the police department.

Melvin added that the department’s body-worn cameras “are close to coming out.”

Melvin said the department waited initially on them because they wanted “to get it right” and that now they were happy with the final product.

“It’s exciting times — body cameras,” Fratus said. “We didn’t want to get the first ones that came out… We did a lot of research on them.”

According to Fratus, the new cameras will be based off an Android phone model and, according to Melvin, PAPD’s new uniforms will have slits specially made for the body cameras.

“Now we’ll have a backup tool,” Melvin said, indicating that accountability works both ways — both for police and for citizens.

“Our training starts Monday,” Fratus said. “It will be a full eight-hour training and we’re training everyone in the department.”

Fratus said the department would be inviting the media to attend their official unveiling, so the community “can see exactly what we’re doing.”

Fratus also said the new cameras would upload video into the cloud at almost real-time.

“So, if there’s ever a need, we can log in and almost view it in full-time,” he said.

Some community members who attended Saturday’s event did receive help in real time as they brought their concerns about their neighborhoods to the police officers present.

Karen and Dale Swan live in the east side of Port Arthur, specifically in “the loud music and gunfire community,” according to Karen.

Swan said they have tried to start a Neighborhood Watch Group in their area but have not had success due to concerns of local threats and a lack of police support under the old leadership.

Melvin was quick to assure her that she and her husband had come to the right place and that officers with the Community Response Unit would address her concerns. Officers Jonathan Green and Lan Nguyen promptly went to her, gave her their cards, and took down her information.

“We are here to make a difference in the community,” Melvin said. “Please hold us accountable.”