Groves couple have coffee in their blood 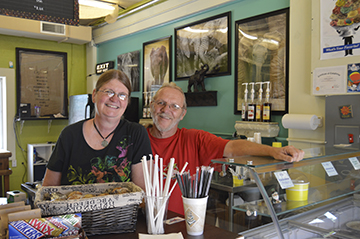 Herb and Cindy Kreutzer started a coffee shop in 2009. They later sold it, but they decided to reopen another one at the corner of 39th Street and Lincoln Avenue in Groves. David Ball/The News

Herb and Cindy Kreutzer started a coffee business in Groves nearly a decade ago. They sold the business a few years ago and started other businesses, but they still missed brewing and serving coffee.

“We missed the coffee business and we’re good at it,” Herb said. “People would ask when we would do it. We missed our customers. A lot of our customers become friends. We love it. We knew what we had to do.”

Cindy said she thought their business became something of a little club, a sort of “Cheers” of the coffee world.

Then the property became available at the corner of 39th Street and Lincoln Avenue this year. Consequently, Sundara Coffee House was born on May 17.

Herb said they tried to get the property a couple of years ago. Circumstances lined up recently and the Kreutzers knew it was time to move or miss out on an opportunity to buy it.

They also own Kizmet Art Studio that is next door to the coffeehouse.

“We have everything under one roof,” he said.

The drive-thru helps the business too, Cindy added.

In addition to different kinds of coffees, the store also serves Ashley Ice Cream that Herb described as very rich because it is made with more cream than other ice creams.

“No one else in the area carries this. It’s not for the faint of heart,” he said.

Customers may order either the standard potato or the speciality potato. Cindy is working on improving the butter for the potatoes.

The specialty potato is served every day of the week that ranges from chicken fajita and pulled pork, to a chicken friend chicken potato. The potato of the day is posted on their Facebook page.

In addition to running the business, Herb teaches art at Tekoa Academy in Port Arthur and art classes at Kizmet after school, Monday through Thursday.

The Kruetzers also said they believe in being part of the community where they live. They plan to hold events such as art exhibitions, rescue dogs events, barbecues and more on the property.

“You’ve got to be part of the community because without it, you won’t be here,” he said. “It’s important for a small community to have change and flow or it will die.”