West Side residents speak out about the aftermath of German Pellets 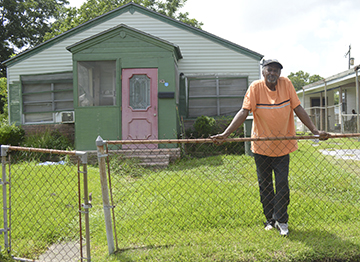 Frank Richardson, a resident of Port Arthur’s West Side, lives in the shadows of the German Pellet facility and said he suffered some health problems when one of the facilities silos was producing smoke due to a fire. Mary Meaux/The News

Port Arthur resident Frank Williams sat on his front porch and scratched off a Lotto ticket as the mid-day sun and Southeast Texas heat beat down on Saturday.

“I just got back from dialysis,” Williams looked up and said.

Not far from his home is a set of 85-foot tall silos owned by German Pellets that are housed at the Port of Port Arthur. The greyish silos rise above an earthen levee and fence line in this quiet Westside neighborhood.

Smoke from a fire in one of the silos which burned for almost two months, is now gone but its effects touched the lives of a number of residents.

While the smoke is gone “it’s still in the air,” he added.

“I have kidney problems and use and inhaler,” he said. “When you inhale smoke it messes with your lungs. I was barely breathing.” 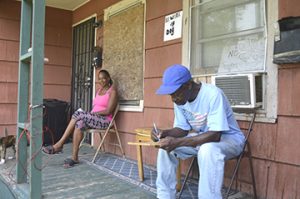 Dinisha Joseph, left, and Frank Williams have health problems that were exasperated by smoke from a silo fire at German Pellets facility nearby.
Mary Meaux/The News

His friend, Dinisha Joseph, said she felt the effects of the smoke as well. Joseph has chronic obstructive pulmonary disease and she too uses an inhaler.

“My blood pressure went up and I had a lot of headaches,” Joseph said. “I have air blowing in my house but I need cool air to keep my lungs clear. I was feeling dizzy, nauseated and sick.”

Nighttime was the worst for Joseph.

“I kept waking up in the middle of the night coughing, like I was choking,” she said. “I lost my appetite and didn’t want to eat. He (Williams) said you’re wasting food.”

A mama dog under the shade of a nearby tree moved from her tether to try and play with one of her male puppies that was born during the time the silo was smoking.

“I think she had her puppies early. They were small, some died,” she said. “We had her in the house and let her go outside to use it. Only five of the 10 puppies survived. You’d expect a few to die but not five.”

Gary Charles said the smoke not only got into his home and clothing but irritated his and his children’s sinuses. 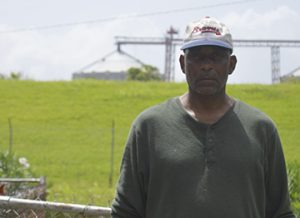 Port Arthur West Side resident Gary Charles talks about the effects of smoke from a silo fire at German Pellets facility nearby.
Mary Meaux/The News

“It (smoke) just recently stopped. There was a cloud of smoke day and night,” Charles said. “It gets in the house, on your clothes, the kids’ clothes. It aggravated their sinuses.”

About a block away, Cornelius Tate and Frank Richardson greet each other at their neighboring homes.

“I ran the bridge and got sick and started throwing up,” Tate said.

The Port Arthur man said he had to spray the home because the smell of the smoke was so strong. The smoke also nauseated his elderly mother as well, he said.

“And I had to wash the house off,” he said, pointing to the home’s vinyl siding.

Frank Richardson said he had some of the same symptoms as Tate.

“Nauseous, eyes burning. It was miserable, I tell you that and at night I couldn’t sleep. I smelled the smoke, got out and checked the house,” Richardson said. “I’ve dealt with it. It made me have a raspy throat and I walk around and sniffle.”

Richardson said he didn’t go to a doctor during this time.

“If I go to the doctor, I’m wasting my time, I have to pay for a doctor,” he said. “I take over-the-counter meds, but the bad breathing, I can’t get rid of it.”

The California native and Port Arthur resident said he enjoys the outdoors and when asked if he tried to stay indoors during the smoke, he was quick to answer.

“Why? It comes inside,” he said politely. “I like the outdoors but when something affects your breathing…”

In 2013, German Pellets, then the largest manufacturer of wooden pellets in Europe, announced they were building five, 85-foot-tall pellet silos and accompanying enclosed conveyor belt at the port as part of a 25-year contract.

But the company would not succeed.

German Pellets filed bankruptcy early last year and then, on Feb. 27 of this year, there was a fire on the conveyor belt at the port. Things went from bad to worse for the company when, on Easter Sunday, a fire broke out in one of the silos.

Fighting the fire wasn’t an easy task as the pellets were meant to burn.

Residents were and are critical of the company’s response and on June 3, there was a peaceful protest against German Pellets. In the early morning hours of June 4, the No. 2 silo collapsed.

Less than two-weeks later — on June 16 — a hot spot was detected with internal sensor readings on an adjacent silo.

The Port Arthur Fire Department has maintained a 24-hour presence at the German Pellets terminal and has overseen approximately 4,700 tons of products removed from the debris pile. Some of the hot spots were unable to be accessed directly due to several thousand tons of steel debris and potential collapse hazards, according to information from the City of Port Arthur at that time.

Now, the company has more than a collapsed silo on its hands. With the ire of residents rising, the mayor of Port Arthur announced legal ramifications for the community’s suffering.

Port Arthur Mayor Derrick Freeman announced through Facebook that the city was granted a judgment against German Pellets for their “ongoing nuisance.”

“Once the temperature began to rise in the second silo, we felt it was necessary for us to ask the courts to intervene and focus on their clean up efforts,” Freeman said. ‘We have another court date set for July 14.”