Plenty of ways to celebrate the Fourth of July on Tuesday 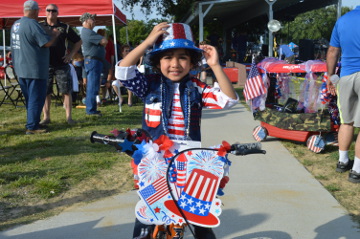 FILE PHOTO — Aaron Jasani stops for a photo after the Bike and Wagon Parade at Doorknobs Park for the Nederland Fourth of July event in 2016.

Families looking to celebrate Independence Day have a number of options to consider this year — from food and a bike and wagon parade for kids to musical entertainment, honoring of the nation’s veterans and fireworks.

There will be activities for kids and adults, live entertainment and more, including free ice cream provided by Motiva. Food trucks will also offer a variety of culinary delights, so bring along a few dollars, according to information from LSCPA.

The Community Band of Southeast Texas will provide entertainment as well as Port Arthur’s own Dwight Wagner.

The big fireworks show starts at 9 p.m., just outside along the seawall. Bring your own lawn chairs.

A bike and wagon parade is set for 6 p.m. and a heroes’ walk will be at 6:30 p.m. Entertainment will be provided by Champagne Room and the big fireworks show will be at 9:15 p.m.

Angela Fanette, director of the Nederland Parks and Recreation Department, said signup for the Field of Flags and Heroes’ Walk for veterans ends at 5 p.m. July 1. Veterans can signup by calling Fanette at 724-0773 or email afanette@ci.nederland.tx.us

The walk, she said, is a way to honor our heroes.

“We will escort the preregistered veterans to the VIP area of the park,” Fanette said. “We are asking the people along the walk to recognize those folks who have given their.”

The heroes’ walk is something new added to the annual event.

“We were brainstorming on what else we could do (at the event) and thought, why not incorporate our VIPs, our veterans who gave so much to us and thank them the best we can,” she said.

She offered thanks to Texas Roadhouse who is gifting al of the food for the veterans — calling it a blessing.

A group of children are scheduled to place small American flags in a section of the park to add to the patriotic event.

Fanette said there would be a number of vendors on site but picnics are welcome. She asks those who bring coolers to refrain from bringing glass or alcohol, which is prohibited. Also, no open flames or grills

Train rides will once again be offered, the playground will be available and the pool will be open from 5 to 10 p.m. with regular admission rates.

Fanette suggests those who want to be at the pool to get there early as spaces fill up quickly.

More than 1,000 people pack the park each year with more thousands watching from adjacent neighborhoods. The radio station Q94 will simulcast the program so those not able to get to the park can hear the event.

She also gave kudos to others who have made the event successful.

“We, in the parks department, are definitely appreciative of the police, fire and public works departments for their assistance I this event,” she said. “We couldn’t do it without their help and presence.

Performers include Nashville artist Kylie Frey as well as other artists including Britt Godwin, Harrison Swift and Frank Ray.

There will be food trucks on hand and picnics are welcome.

The new event is the brainchild of Gary Brewton of Beaumont.

“This will be a fun, family event so bring your lawn chairs and your blankets,” Brewton said.

Brewton go the idea to throw a Fourth of July free concert when he realized there was no Independence Day events set for Port Neches.

Brewton said he has spoke with representatives of the Port Neches Chamber of Commerce and hope the event will become an annual one as well as adding a fireworks show next year.