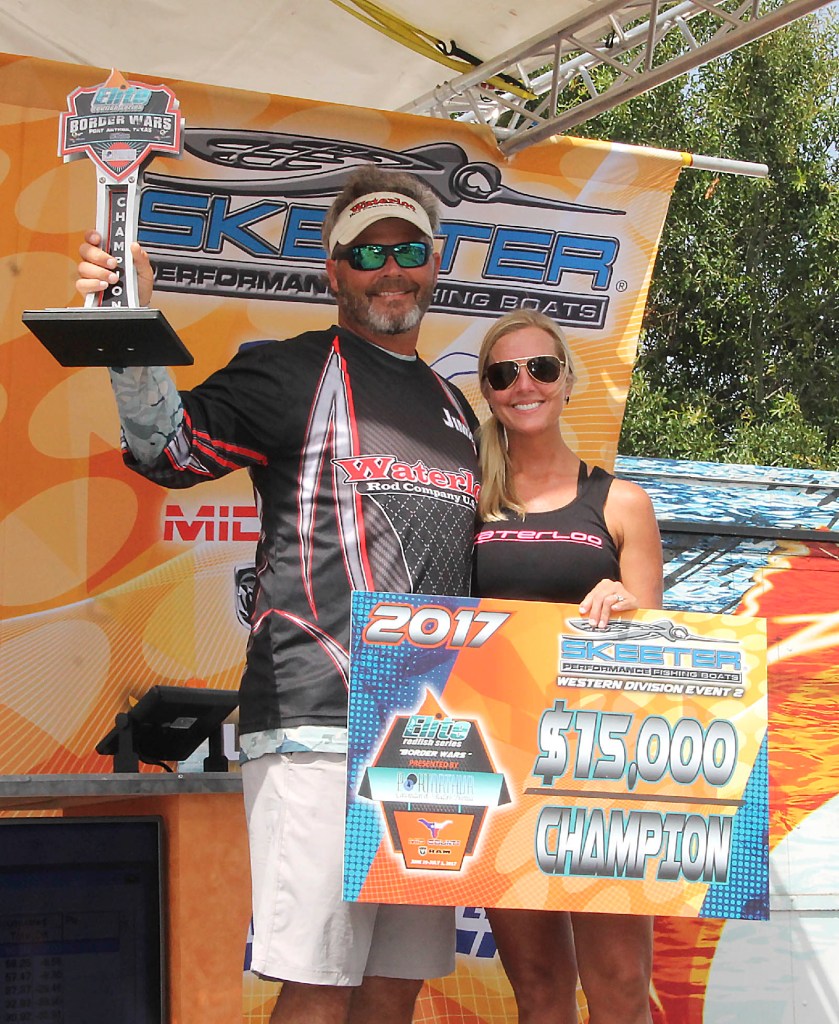 Jimmy Lloyd and his wife Amy, both of Lumberton, hold up their championship trophy and $15,000 championship billboard after Jimmy won Border Wars on Saturday. (I.C. Murrell/The News)

If Jimmy Lloyd was really lucky to find his life jacket and wallet the day after losing it in local waters, he was blessed to return to Lumberton with a heavier wallet, so to speak.

“Right there, brother,” Lloyd said, pointing to a higher power as the source of his blessings. “The power of prayer; that’s what that is.”

Lloyd beat David Christian on the final weigh-in of the Elite Redfish Series’ Border Wars on Saturday on the parking lot of the Bob Bowers Civic Center to earn his first win on the circuit and a $15,000 cash prize. Christian pocketed $6,000 for second place and an additional $1,500 for having the big bag of the three-day tournament (27.05 pounds).

Jeff Steckler, who had the second big bag for $1,000, was third, Kevin Broussard fourth and Travis Land fifth.

Lloyd hauled in 21.93 pounds as the last angler to weigh-in and finished with 66.83, dethroning Christian from the cushiony hot seat reserved on stage for final-round leaders. Christian, who caught 58.25 for the tournament, had turned in his bag just moments before.

Fishing in familiar waters such as the Neches and Sabine Rivers and Sabine Lake might have given Lloyd an advantage.

“I probably had a little bit of an edge,” he said, “but there are a lot of good fishers out there.”

Twenty anglers registered for the three-day tournament, but only the top five after Friday got to fish Saturday.

Neither Land nor Broussard, who was third going into Saturday with 37.37 pounds, caught any fish Saturday.

“I just never got the right bites today.”

Lloyd can attest to the difficulty of fishing within a certain limit, likening it to grocery shopping. Anglers had to fight for the right-sized fish under different conditions throughout the three days, from rain to wind to sunshine.

“You put in your time and you practice and you try to look for the fish, and I knew where the 4- to 6-pound fish were,” Broussard said. “I went there today, and I ever got the bites. That’s why we practice as often as we do. That way, if you need another spot, you can go to it.”

Broussard said he went to about eight different spots and burned about 50 gallons of gas Saturday. Lloyd fished the same place twice, among his many hot spots.

Good thing he knew where to locate his life jacket, which had his wallet in it when he lost it Thursday.

“It was floating up near the cane on the Intracoastal,” he said.

The Elite Redfish Series will wrap up its latest stay in Port Arthur on Sunday with the final round of the two-day Elite Kayak tournament. Weigh-ins begin at 3 p.m. at Bob Bowers.