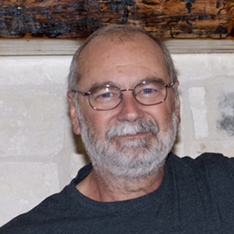 Emmitt J. Landry Jr., 64, formerly of Groves, Texas passed away on Wednesday, June 28, 2017 at his home in Spring Branch, Texas surrounded by his loving and devoted family. He is at peace after a long fight with pancreatic cancer.

He was born on March 22, 1953 in Port Arthur, Texas to his parents, Emmitt J. Landry Sr. and Trudy Brown Landry. He graduated from Port Neches-Groves High School and Lamar University. He retired from Chevron Phillips Chemical Company in 2013 after 37 years of service. He was an outdoorsman, photographer, craftsman, stained glass artist and mountain lover. Emmitt was a lifelong resident of Groves prior to moving to Spring Branch 4 years ago. He and his beloved wife, Carleen, built a new home in the Texas hill country shortly after Emmitt’s retirement from Chevron.

He is survived by his wife of 31 years, Carleen Landry; parents, Emmitt J. Landry Sr. and Trudy Brown Landry of Groves; brother and sister-in-law, Randy and Clare Landry of Groves; sister and brother-in-law, Karen and Rickey Lister of Buna; stepsons Eric Maddox of Pearland and Chris Maddox of Austin; sister-in-law and brother-in-law, Maxine and Clyde McManus of Spring Branch; brother-in-law Larry Bonin of Woodstock, Georgia; nieces, nephews and great nephews he adored and who idolized their favorite “Uncle Mitt”.

Visitation for family and friends will be on Saturday, July 1, 2017 from 2:00pm to 5:00pm at Clayton Thompson Funeral Home in Groves. Please make memorial donations to the Pancreatic Cancer Action Network at www.pancan.org. Emmitt has chosen to have his ashes spread over his favorite places in Colorado. Like his favorite t-shirt said, the mountains are calling and he must go.