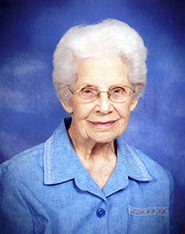 Born July 5, 1923, Lane lived her entire life in the Port Arthur area, graduating from St. Mary’s High School (1941) and Port Arthur Business College (1942).  Lane deployed her considerable secretarial talents in the service of a number of employers, including Gulf Oil, the U.S. Army, the Port Arthur Abstract Company and, many years later, for St. Catherine’s school.   Lane married Willis Doré in 1947, a union that lasted over 70 years.  She was a devoted and ever-worrying mother for their four children and a warm, loving and ever-proud “MawMaw” to nine grandchildren and five great-grandchildren.

Lane spent her retirement years with Willis in Groves, working alongside him preparing countless Sunday and holiday meals for extended family.  They passed their time “visiting” over coffee—strong coffee!—with friends, relatives and neighbors, traveling to see children and grandchildren, as well as making an occasional overseas tour.  Before her final struggle with dementia, Lane enjoyed reading, crossword puzzles, and old movies.  Always a devout Catholic, Lane was a member of St. Peter the Apostle Parish and an active member of the St. Catherine’s Altar Society.

Lane was preceded in death by her brothers Harry and Bentley.  She is survived by her husband, Willis, and by children, Nanette (Gary) Babin of Bridge City, Texas, Monica Doré of San Antonio, Texas, Matt (Laurie)  Doré of Des Moines, Iowa, and Marianne (Keith) May of Cross Roads, Texas.  Lane’s grandchildren are Kyle and Jeremy Babin, Sarah May Nguyen, Jonathan and AnnMarie May, Kathryn Doré, and Emilie, Anna and Peter Doré.  In addition to five great-grandchildren, Lane’s surviving relations include her sister Ethel Savoy and many nieces, nephews and their families.

The family will receive visitors at Grammier Oberle funeral home from 5 to 8 p.m. Tuesday, with a Rosary service at 6 p.m.  Lane’s funeral Mass will be held at 11 a.m. Wednesday at St. Peter the Apostle church.