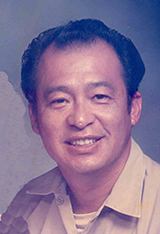 He was born on August 20, 1941 to his parents, Fernando Valdez and Patrocinia Cortez Valdez in Lockhart, Texas. Bernard was a resident of Port Arthur for most of his life. He graduated from Thomas Jefferson High School in 1959. Bernard joined the U. S. Navy after graduation and was honorably discharged from active duty. He worked at Burton Shipyard as a carpenter for many years. Bernard retired from Lamar University System in the maintenance department on the Lamar State College campus in Port Arthur. While he worked at Lamar, he earned two Associate of Applied Science degrees in Automotive Mechanics and Auto Body Technologies, he also made the Dean’s List.

He was preceded in death by his parents and his brother, Celestino Valdez.

Bernard is survived by his caregiver/cousin, Gloria Adams and husband, Rudy of Nederland, several other cousins and extended family, host of friends.

Visitation will be on Monday, June 26, 2017 from 9:00 AM till 11:00 AM at Clayton Thompson Funeral Home in Groves. Graveside service with Military Honors will be at 11:00 AM Monday at Greenlawn Memorial Park in Groves.