Nice ring to it: Roberts finds way into Museum hall 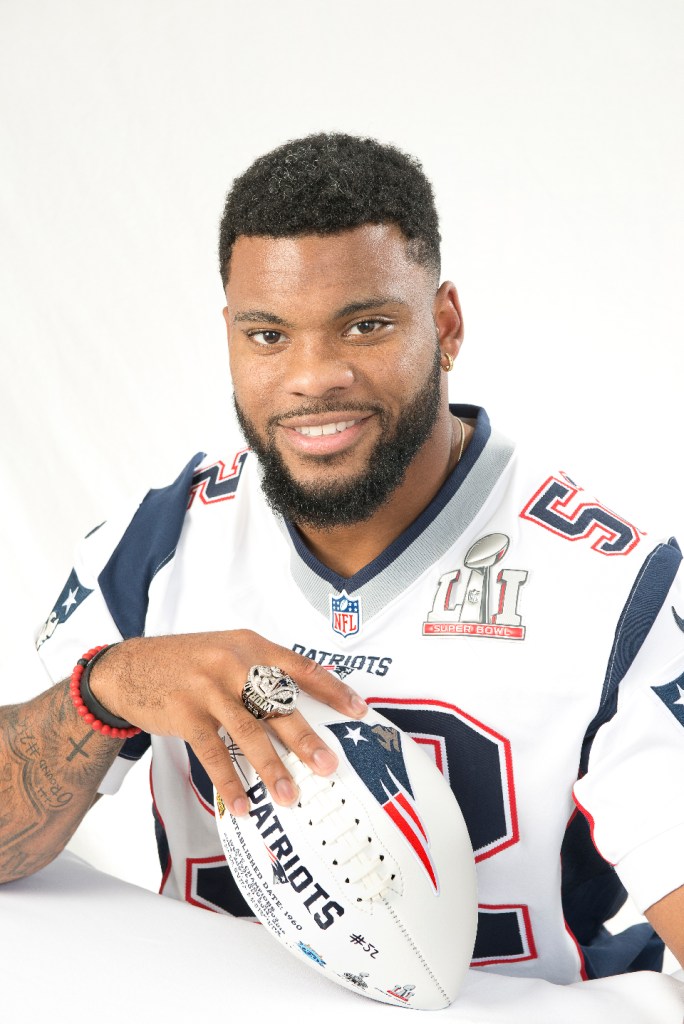 The first time Elandon Roberts walked into the Museum of the Gulf Coast, he was a Port Arthur Memorial senior being honored as a Port Arthur News Super Teamer.
He saw that a Super Bowl champion from the New England Patriots, Eric Alexander, had made the museum’s Sports Hall of Fame, among other Port Arthur ISD graduates like Jimmy Johnson and Jamaal Charles.
“I gotta find a way to get in here,” he recalled saying then.
That was in December 2011. Almost six years later, Roberts will be inducted as a rookie Super Bowl champion.
And like Alexander, the 2000 Stephen F. Austin graduate, did for four years, Roberts wears No. 52 for the Patriots. (Alexander, who like Roberts was a linebacker, wore No. 49 as a rookie when the Pats won Super Bowl 39 in the 2004 season.)
Almost two weeks removed from mandatory minicamp, Roberts did a photo shoot Monday for his induction into MOGC Sports Hall at 3 p.m. next Monday. The public is invited to the ceremony at the museum.

283 diamonds
Roberts also brought with him a nice piece of jewelry — a 283-diamond Jostens-designed championship ring he received nine days earlier.
“This is what you work for,” Roberts said at The News’ office Monday. “Getting it, it was just kind of like, this is what it’s all about. I could say on it, you’re already a champion. You’ve been a champion since February, so it wasn’t the point of that. It was more looking at the ring and this is what I worked for.”
There is significance to the diamond count.
“28-3,” Roberts said. That was the deficit New England faced when it made the greatest comeback in Super Bowl history and won 34-28 in overtime.
Roberts didn’t know whose idea it was to include 283 diamonds in what the Patriots said is the largest Super Bowl ring ever created. The Patriots didn’t specify in its release on the ring.
“We [players] didn’t create this ring at all,” he said. “It’s a lot of significance around the ring.”
The design includes five Vince Lombardi trophies on the top of the ring and the seasons in which New England won the Super Bowl (2001, 2003, 2004, 2014 and 2016) on one of its sides. The other side includes the phrase “Unequivocally the sweetest,” which was attributed to Patriots owner Robert Kraft, the Super Bowl 51 score and logo and the Patriots’ record (17-2).
Roberts made a game-saving tackle of Devonta Freeman’s 39-yard catch-and-run for the Atlanta Falcons late in the fourth quarter, with Atlanta still leading 28-20. Despite an improbable Julio Jones catch that followed, the Falcons punted, setting up New England’s tying drive.

Already a Hall of Famer
Roberts didn’t take long to make his local museum’s sports hall. Museum director Tom Neal made sure of it.
“When you got a young man who’s in his rookie year, and you all were hitting it real well — you just stood out for some reason — if you look at the record of the museum, we usually wait until someone has several years of their coming by,” he said. “The part that caught me was I knew we did the right thing and everybody was excited, and you kept right on going.”
The 5-foot-11, 233-pound Roberts started five games and played in 13 as a rookie, finishing with 45 tackles and one forced fumble. He made his first start on Oct. 16 against the Cincinnati Bengals.
“I don’t know if we gave you some juice or what happened,” Neal told Roberts. “We’ll do it again if we have to; we’ll throw you out and put you back in.”
It took Neal three times after hearing from a reporter covering the Super Bowl that Roberts made the Big Game to realize that he was going to have another Super Bowl champion in the museum. Roberts is now the eighth such to go into the museum.
Not so long ago, he was a graduating Memorial Titan looking inside the 700 Procter Street building for the first time.
“I didn’t even know it looked like that in there, and I was just like, one day I got to get in here,” he said.
•
I.C. Murrell: 721-2435. Twitter: @ICMurrellPANews