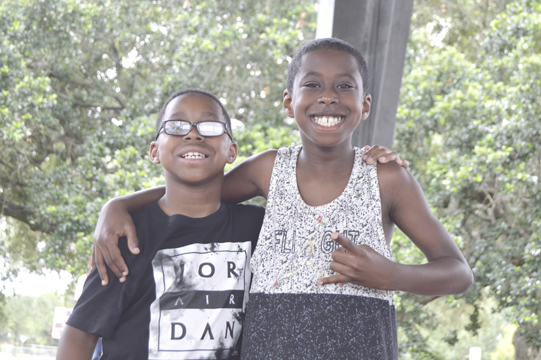 Rayshawn Wallace (left) and Julian Batiste appear thrilled to be at Port Arthur Cadillac Riders’ First Annual Kid Fun Day in the Park Saturday. They said their favorite part of the event were the basketball and face paint respectively. (Lorenzo Salinas/The News)

The smell of the smoke pit, the warmth of the mid-day sun, the constant drumming of the basketball against the court and the sight of family and friends all marked a clear Saturday in Gilliam Circle Park as the Port Arthur Cadillac Riders held their First Annual Kid Fun Day in the Park.

The event featured five-on-five basketball tournaments for boys and girls ages 10 to 16 with $100 given to each winning team. Other activities, like kickball with family, face painting, bounce houses, volleyball and a car show, were offered for kids young and old absolutely free.

The Riders, or PACR, were formed by president Dekurtis Davenport and vice president Toryn Foreman four months ago over a love of cars and of helping out their community. 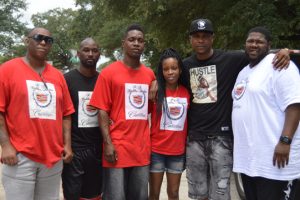 Davenport and Foreman are Port Arthur natives and graduates of Abraham Lincoln and Thomas Jefferson respectively. They said they wanted to provide something good for Port Arthur youth.

“We knew something needed to be done for the community, so we started a car club,” Foreman said.

“The cars were to get the kids’ attention,” Davenport said.

“We want to start something that’s good and fun for the community.”

Among its charitable deeds, the PACR helps PAISD board member Brandon Bartie raise scholarships for local students, according to Foreman.

“We help students with their STAAR tests get their scores up,” Davenport said.

According to Foreman and Davenport, they have Port Arthur Mayor Derrick Freeman’s “100 percent” backing. 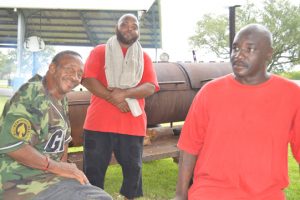 And as more parents arrived bringing their kids to the park in droves of two, three or more, the two PACR officers remarked that the event was a way to reach out to children who might be going through some of the same obstacles they went through when they were young.

“Personally, I’ve been through all of it before,” Foreman said. “I’ve lost my mother and my father; I’ve fallen victim to the streets — I know what it is kids go through and I’m here to help them.”

Both Davenport and Foreman have worked in the plants before, doing such jobs as scaffolding and superintending, and they said they want to help any kids who might need training or a vocation at the refineries.

“We want to give kids a trade and train them in it,” Foreman said. “We want them to know what it takes to work.”

As children ran back and forth on the basketball court behind him, Davenport named some of the challenges that today’s youth experience on a daily basis.

“Crime, peer pressure, not going to school — that’s all part of a cycle we’re trying to break,” he said. “There’s so much opportunity out there that we want kids to know they don’t have to join a gang to get ahead.”

Davenport also mentioned a teen summit being held later in the year at the West Side Development Center that PACR plans on helping. 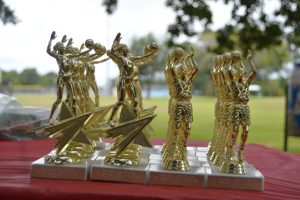 A preview of the trophies to be given out to the boys and girls teams who will compete in the basketball tournament Saturday at Gilliam Park. (Lorenzo Salinas/The News)

“We needed a positive organization in Port Arthur that would give children opportunities and give them something positive to do in order to change the community,” Jeri Sanders, treasurer for PACR, said.

“At first, I thought it was a chance for the guys to play with their toys,” Alexis Wallace said laughing. “But, they put together a fundraiser for children and for raising school supplies for students.”

Wallace said when she was a kid the city had a “Cops 4 Kids” program where bicycles were given out to the local youth. According to her, the city does not do that anymore.

“So this is pretty much something for the kids to do,” Wallace said of the PACR event.

“It’s a positive thing for the community because a lot of the time, kids have nothing to do and that could get them in trouble,” Sandra Johnson, president of Cadillac Divas, said.

“So, this is something where they pay nothing for fun and it brings the members of the community together.”