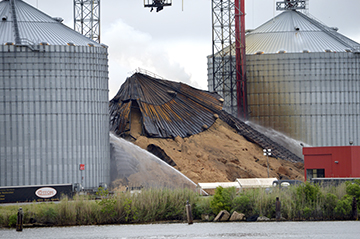 FILE PHOTO— Firefighters continue to douse hot spots at the site of a collapsed silo owned by German Pellets on June 5. The silo, which had smoldered for more than 50 days, collapsed early June 4. Mary Meaux/The News

Less than 2-weeks after a German Pellets silo collapsed at the Port of Port Arthur, a hot spot has been discovered in an adjacent silo.

On Friday, the United Command Team was made aware that internal sensor readings on the silo adjacent to the collapsed silo has developed an internal hot spot, Risa Carpenter, public information officer with the city of Port Arthur,said in a press release.

“This hot spot is being continuously monitored while solutions are explored. Every option is being considered at this point, ranging from internal nitrogen injection to controlled demolition,” she said.

The Port Arthur Fire Department is continuing to maintain a 24-hour presence at the German Pellets terminal and is “ensuring every necessary action is being taken to end this incident as quickly and safely as possible.”

PAFD has overseen approximately 4,700 tons of product removed from the debris pile to date. There are some hot spots the fire department is unable to access in the collapsed silo directly due to several thousand tons of steel debris and potential collapse hazards. The volume of smoke released is at the lowest levels since the incident occurred, according to the city.

A hot spot was detected in the now collapsed silo on April 15 and ignited early the next morning, April 16. The flare-up was immediately extinguished and firefighters began to cool off the No. 2 silo with water to reduce the temperature.

On June 3, after about 50 days of smoldering, a group of citizens took part in a protest citing health problems due to the continuous smoke.

Heavy storms moved through the area that night and at about 4:20 a.m. June 4, the silo collapsed. No injuries were reported and firefighters continue to monitor the site as they have for the past 60-plus days.

“The Port Arthur Fire Department is committed to maintaining a presence though the conclusion of this incident,” according to the press release from the city.

GPTX has a dedicated phone line to respond to inquiries regarding this incident. If you have any additional questions, please call (409) 200-3313, or visit www.gptxupdates.com.