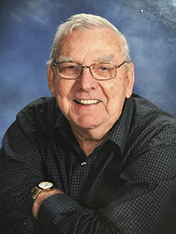 Patrick Lawrence Fairchild, of Portland Texas, passed away peacefully on Sunday, June 11, 2017.  He was born March 5, 1935 in Port Arthur, Texas Willard and Molly Fairchild.  He attended Port Arthur schools, where he met the love of his life, Patricia Ann Greig at the age of 13 and graduated from Thomas Jefferson High School in 1953.  He was an avid Boy Scout, receiving his Eagle Scout in 1951. He excelled in track and field, received many medals and honors, including a scholarship to Texas A&M University where he was a proud member of the Corp of Cadets, Class of 1957. Whoop!  While still a student, he married Patricia on June 5, 1954.

Patrick began work at Houston Chemical in Beaumont, Texas, working as a laborer and worked his way up through the purchasing department.  After receiving his BBA from Lamar University in 1972, he was promoted to purchasing manager, working in Ponce, Puerto Rico; Beaumont, and Corpus Christi, where he retired after 33 years.

Patrick’s love of scouting carried on, serving as Scoutmaster for his boys.  He continued his love of athletics, coaching softball and refereeing basketball and football.  After retirement, he and Patricia dedicated many hours to volunteering in the St. Vincent de Paul Society, of which he served as President, the homebound ministry, usher and Eucharistic Minister at Our Lady of Mt. Carmel Church in Portland.  He also served many hours volunteering for Christus Spohn Hospice and received a Caller-Times Jefferson Award for volunteer service to the community in 2002.

The funeral mass will be celebrated on Wednesday, June 14th at 10:00 am.  Burial will follow in Palms Memorial Gardens Cemetery, Portland. Pallbearers will be his grandsons.

The family wishes to thank Deacon Larry Rodriguez, Hortencia Ochoa, Dorothy Carillo, and Christy Armstrong for their loving care of Patrick during his illness.