Kid Fest: a celebration of superheroes and everyday heroes 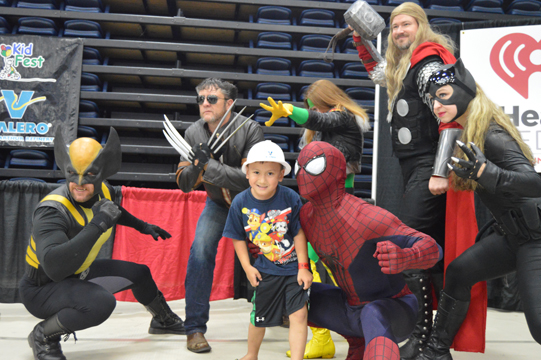 One lucky child gets to pose with some of comic books’ most famous heroes Saturday at the 2017 Valero Kid Fest in Port Arthur. (Lorenzo Salinas/The News)

Dinosaurs walked the earth while superheroes posed with the public on a clear and sunny day in Port Arthur.

The Eighth Annual Valero Kid Fest came to the Carl Parker Center on Lamar State campus Saturday in what has been billed as “The Biggest Kid Party in Town.” And with activities as numerous and varied as fishing, face painting, basketball and bounce houses, it was not hard to see why.

Still, as public affairs manager for Valero Port Arthur Barbara Phillips pointed out, it was both a party and a learning experience for the children.

“It’s both fun and educational,” Phillips said. “They have a great time and we sneak in some safety and education, too. The kids get to learn and play with a lot of activities we have here.” 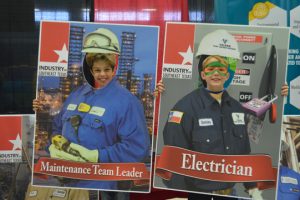 Included among those activities were booths manned by engineers demonstrating the finer aspects of oil and water distribution through a colorful display; Army Corps of Engineers teaching children about water safety; and a Valero volunteer showing kids the science of astronomy with a working telescope.

This was in addition to a sizeable booth set up by the company where “baseball cards” of industry professions like chemical engineer, process operator and electrician were available to kids with the starting salaries and education requirements for said fields on the backs of the cards, as well as job descriptions for each.

The Port Arthur Police Department was also on hand to engage with the community and to educate the public a little bit about what they do. 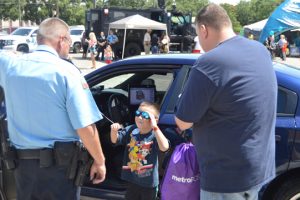 A young boy is treated to a tour of a Port Arthur police cruiser by one of PAPD’s finest at the 2017 Valero Kid Fest in Port Arthur. (Lorenzo Salinas/The News)

“About 90 percent of this car is computer,” Lieutenant Bubba Blitch said, referring to a midnight blue police charger. “It’s all operated by computer.”

However, the officers at the event were also trying to teach a different lesson about police and community relations.

“The kids get to see the fun side of Port Arthur Police,” Detective P. Britton said. “We partner with the public and join forces with them to lead to a better community.”

“It allows the community to see the friendly side of us,” Blitch said. “We’re not going to put them in jail.

“In fact, when some parents bring their kids to us, they tell them to behave or we’re going to lock them up. The first thing we tell them is, ‘No, we’re not.’”

Blitch was also quick to thank the City of Port Arthur for working with them every year and for supporting the department. 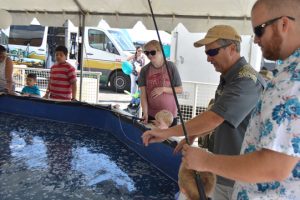 Festival attendees gather around the fishing pool casting their lines to see if they walk away with a big catch Saturday at Valero Kid Fest. (Lorenzo Salinas/The News)

Both Phillips and Blitch stressed the importance of safety at Kid Fest, remarking that no child leaves the premises unattended without an adult and/or a corresponding wristband number with the adult they came in with.

“It’s a lot of different things for the kids to try out,” Mike Bui, parent and attendee, said of the annual event. “It lets them get out and do other things rather than just sitting at home.”

Bui compared Kid Fest to a job fair, where his children could see some of the job opportunities available to them from places like Valero. However, the event seemed to be positive for a whole other reason.

“It wears them out by the end of the day,” Bui said with a laugh.

Ebony Frank brought her son out to the event and praised the wide variety of activities available to him.

“It’s good,” Frank said. “I like having activities for the kids to play in and have fun with.”

Marigold Dooley, a Valero employee and a proud parent, seemed to have similar sentiments.

“I have two boys and this is our third year here,” Dooley said.

“Both my husband and I work for Valero, and so we thought it was good for the kids to come here and play in the different kinds of activities. It’s fun.”

Dooley said her sons like the fishing activity the best.

“This is a good community event.”

One of the many volunteers at the fest, Patrick Tremont, agreed that it was good for the community.

“It’s for a good cause, it’s a lot of fun and Valero brings out a lot of opportunities to love with our sponsors for the community and for the children,” Tremont said. “There’s no way I’d pass up helping children.”

Tremont said he particularly liked the inflatables and live-action show where they host the anti-bullying event, as well as the walking dinosaurs. 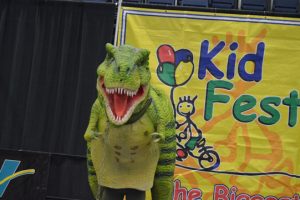 Phillips estimated last year’s Kid Fest attendance at 2,500; she expressed confidence that this year’s number would be more.

“I think we will surpass that this year,” Phillips said. “It makes us very happy to have the community come here, enjoy themselves and support us.”