PAPD team works to “Talk ‘Em Out” —for this group, talking is a tactic 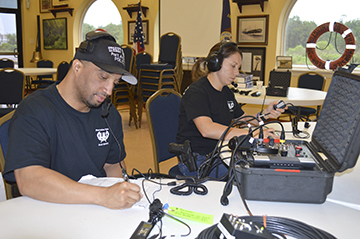 Safety for all involved is the ultimate goal of the Port Arthur Police Hostage Negotiation Team.

“Talk ‘em out is our motto,” Sgt. Lam Nguyen, team leader of the group, said. “We want to talk people out (of the situation safely)”

The team gathered on a recent day at the Port Arthur Seafarer’s Center for training and equipment maintenance where they spoke about their roles and goals as negotiators and how the process generally works. 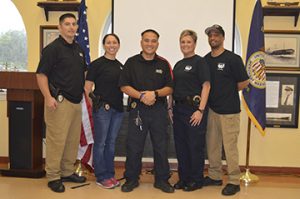 The team consists of six officers that range from seven years experience in law enforcement to 24 years experience and includes both men and women. Nguyen is fluent in Vietnamese and Officer Tomas Barboza is fluent in Spanish, which makes the team better able to communicate with the diverse community.

Nguyen explained that each member of the team holds a certification through the International Association of Hostage Negotiators. The group recertifies every two years although recertification is not a state or national mandate but IAHN highly suggests recertification. 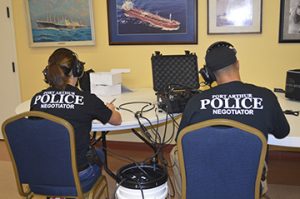 Per policy, when SWAT is called out, the team leader must be notified and from there their participation depends on the situation.

“The first thing we have to do is assess the situation and make sure the command is set up and nothing is in the kill zone, or perimeter,” Nguyen said. “Once setup is complete, we will try to make communication.”

Communication comes in a number of different forms and can be door-to-door, over loud speakers, via phone or face-to-face. The tools used to communicate depend on each scenario.

“We also must ascertain as much intelligence on the person that we can and also about the persons inside (with the hostage taker),” Bodden said. “The more we know the best we can assist and more successful we can be.”

Team members are given assignments and are cross-trained across the different assignments. On this particular training day, Guedry served as the main negotiator. She sat at a table, pen and pad in hand and wearing a special headset where she could communicate with Nguyen, who was acting as the hostage taker that was using a special phone.

Bodden was seated next to Guedry and acted as coach. He too wore a headset but was only able to listen, not speak, and chronicled everything said.

Nguyen later explained that the main negotiator is the only one of the team making contact with the suspect and his or her attention must be focused solely on this. The coach, who listens, received intelligence from other team members and can pass the written info on to the negotiator. 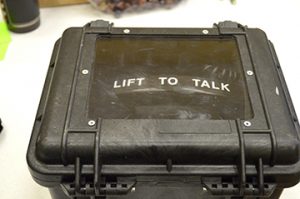 A phone used to communicate with a hostage taker.
Mary Meaux/The News

“From there, it goes by how well we establish communication and how this person communicates,” Bodden said. “It’s a fluid situation. In one situation, the person may want to speak, other times it may be 30 minutes or an hour before they (suspect) communicates.”

SWAT, Nguyen said, goes in as a last resort.

“The goal is to save lives,” Nguyen said.