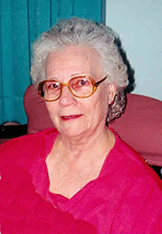 Joyce Cole Martin, 93, of Port Arthur passed away on Tuesday, June 6, 2017 at the Arboretum of Winnie Nursing and Rehabilitation Center.

She was born on October 6, 1923 to her parents, Nellie Strother Cole and Landry Cole in Pitkin, Louisiana. Joyce has been a resident of the area since 1946. She was a caring and loving homemaker in raising her five children with her husband, Edgar. Joyce was a longtime member of Calvary Baptist Church in Port Acres.

She was preceded in death by her parents, her two daughters, Melinda Martin and Jolene Jones,  her son, Ronnie Martin and her husband, Edgar Sam “Red Bone” Martin.

She is also survived by her two brothers, Clayton Cole and wife, Nona of DeRidder, Louiisiana and Coy Wayne Cole of Jasper, Texas as well as several nieces and nephews.