Preparedness was the key word during Tuesday’s press conference hosted by state, county and local public information officers at Ford Park. The focus was on hurricanes and, in fact, a hurricane exercise was scheduled following the conference.

Deputy Marcus Mclellan with JCSO was the first to address the media, citing community preparation as the number one goal in disaster events. In addition, he listed a few tips everyone could take to better prepare for disasters.

“Make sure to secure your residency and secure any loose items you may have outside,” Mclellan said. “If you are ordered to evacuate, know your hurricane evacuation routes and take and plan where to stay.”

Mclellan asked for residents to follow the evacuation orders given by county and city officers.

“If you suspect there will be an evacuation, go ahead and leave ahead of schedule,” he said.

Additionally, Mclellan said residents could call 211 for assistance with evacuation and emergency services would then take them to an evacuation center.

He also encouraged people to have a disaster supply kit at the ready, filled with essentials like batteries, first aid supplies and prescription medicines.

“If you decide to stay, plan for adequate supplies… and be prepared to not be able to leave due to flooding and blocked roads.”

Mclellan recommended caching supplies for a minimum of one to two weeks and to keep informed with weather and local conditions through TV and Internet.

Likewise, Mclellan suggested residents register with the Southeast Texas Alerting Network (STAN) through their cellphone or landline in order to receive up-to-date messages and notifications about emergencies, industry or weather events in the area.

For the City of Beaumont, residents could call 311 to sign up to receive updates on severe weather events and other emergency topics.

“Hurricanes and other natural disasters pose a significant threat to Southeast Texas,” Davis said. “Texas (DPS) and the Texas Division of Emergency Management are prepared to coordinate with our partners before, during and after a disaster.”

Davis said, “Our job is to protect lives, property and the lives of first responders during a disaster.”

She insisted that citizens should always heed the warnings of their city and county officials, as well as pay attention to local forecasts.

“It’s very important to stay prepared, and not just for hurricanes.”

Like Mclellan, Davis recommended people have their disaster preparation kits in order, which should include items like a weather radio, personal hygiene items and a “go bag” with five to seven days’ worth of clothes.

“Plan and review your evacuation routes,” Davis said. “And comply with officers.”

Mclellan brought up the issue of liability in regards to those citizens who stayed during a mandatory evacuation.

“During a mandatory evacuation, if you refuse to leave and emergency services have to go get you, you could be held both criminally and civilly liable,” Mclellan said.

In addition, he said those rescued might have to pay for expenses incurred during the rescue.

According to Mclellan, it was a law enacted in 2009. Authorities have not had any reason to enforce it since there have been no mandatory evacuations since that time.

Readers may click on the map below for a higher resolution. 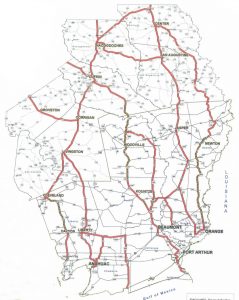 If the above map is still unclear, a higher resolution map can be found at the following address: