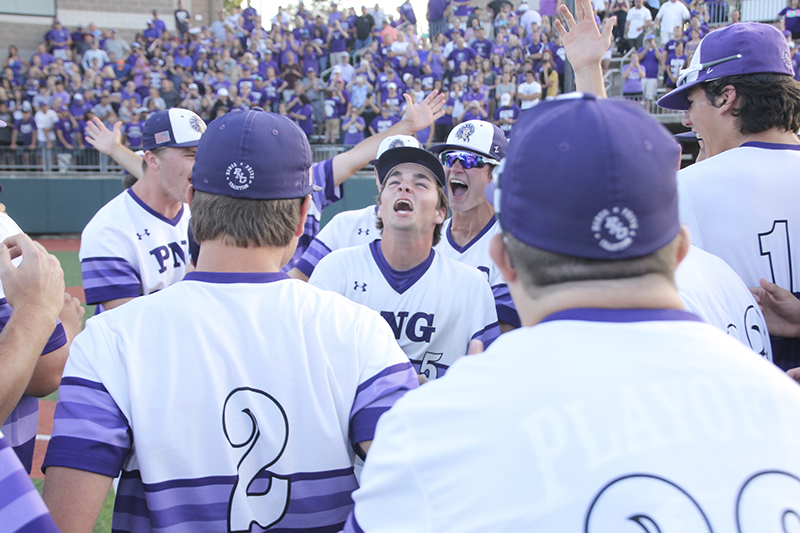 Zach Deckert of PNG leads cheers in a team huddle after the Indians’ 4-0 win over Brenham on Friday in the clinching game of the 5A Region III final at Sam Houston State University in Huntsville. (I.C. Murrell/The News)

HUNTSVILLE — First, Game 1 at Sam Houston State. Then, graduation. Then, Game 2 at SHSU. No Game 3 needed.

Next stop: Round Rock.

Port Neches-Groves’ baseball team is continuing a journey it hadn’t made in 13 years in going to the state semifinal round with a 4-0 win over Brenham on Friday to win 5A Region III championship series in two games. And senior second baseman Logan LeJeune struggled to find the right words to explain the feeling.

“I’m still speechless,” he said. “I mean, it really shows how far we’ve come. Nobody looked at us to go to state. I mean, there’s a lot of doubt, but it proves if you work to come together and get that team camaraderie, it really pushes you. I just love my brothers.

The leadoff batter reached base in four of Brenham’s offensive innings, but Hranicky managed to strand seven, five of them in scoring position.

“I knew they did not need to be there in the first place,” Hranicky said. “I knew that, in my mind, I had to bear down and work out of it. It helps me a lot in my mind that I have to get out.”

The junior faced a big threat in the top of the sixth when Brenham had runners on first and third, but he got Hunter Avila to bat into an unassisted play at second base by LeJeune.

The Indians were pretty confident coming off a 5-3 win in Wednesday’s first game. The week has been one to remember for the 11 seniors on the team, who received their diplomas at Lamar’s Montagne Center on Thursday in between the two games.

“You know it’s big when their No. 1 [pitcher] came out the first game and they had a little doubt in the coach’s mind, and we really just put it to them and it just added a little chip to our shoulder the next two games,” LeJeune said.

Said senior center fielder Jacob Vaughan: “Being up 1-0 is a lot better than the past two series when we were down 0-1 and we had a lot more pressure. I mean, after graduation, it’s just baseball from now on. We don’t have to worry about school or anything.”

LeJeune gave the Indians a big spark with a triple in the No. 2 batting hole in the first inning. Austin Bost sent him home with a single to right.

PNG opened up its lead in the fifth inning when Bost was hit by a pitch with bases full. Vaughan slid into home plate on a passed ball that didn’t make it out of the batting circle, but gave him just enough time to capitalize.

Vaughan made it 4-0 in the sixth on a sacrifice fly with bases loaded.

Eight of the nine PNG batters each had a hit: Hayden Guerra, Holden Lane, Brandon Morse, Trevor Martin, Hranicky, LeJeune, Bost, and Vaughan. Guerra finished the series 4 of 8 after going 3 for 5 Wednesday.

Dane Acker went the distance in defeat for Brenham (27-11-1). He struck out three and gave up the eight hits.

Davion Lockett went 2 for 3 to lead the Cubs. Darvis Watson and Colton Buro had the other two Brenham hits.

PNG will find out its semifinal opponent by Sunday, at the earliest. The 5A semifinals and finals will be held at Dell Diamond in Round Rock, June 8 and 9.