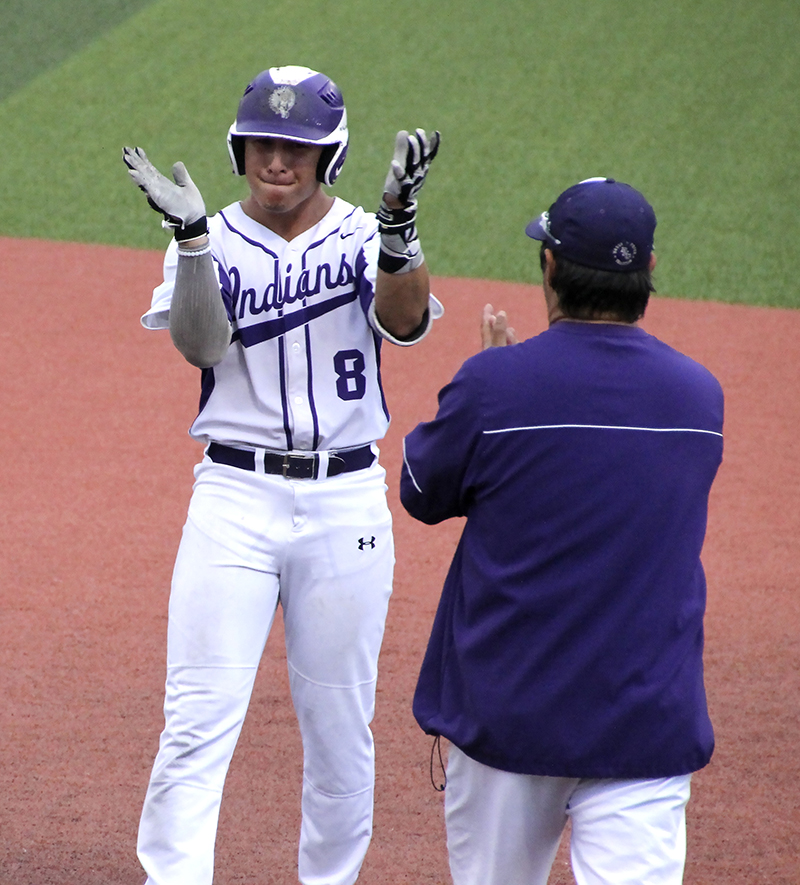 Logan LeJeune of PNG applauds after reaching first base in the top of the third inning Wednesday against Brenham in Huntsville. (I.C. Murrell/The News)

Hayden Guerra broke a 3-all tie in the sixth inning with one-run single with two outs, and Austin Bost with bases loaded to add the insurance run. Guerra finished the game 3 for 5 with a run scored.

Game 2 will start at 6 p.m. Friday, with Game 3 to immediately follow if Brenham wins.

The Indians jumped ahead 3-0 in the third inning when the top five batters in the order produced four hits. Guerra reached on a bunt, and Logan LeJeune and Austin Bost followed with singles to bring in the first run. Nathan Vidrine delivered a two-out double to drive in two more runs.

Morse ran into trouble in the fourth after keeping Brenham without a hit. Chandler Jozwiak led off with a bloop single and, with one out, Zach Marshall drove him in on a double. Following a pair of walks, Marshall Kohring hit a sacrifice fly and Davion Lockett drove in the tying run on a hit.

Logan LeJeune went 2 for 3 with a double. Austin Bost, Nathan Vidrine, Josh Hranicky, Jacob Vaughan and Morse each had a single.

Jozniak allowed all five earned runs on eight hits and struck out three in 5 2/3 innings. Eric Wellman relieved him and gave up two singles in the seventh and got out of a bases-loaded jam.

A win Friday night will put PNG in the state semifinal round for the first time since 2004. The Indians lost in the state final in 2000.