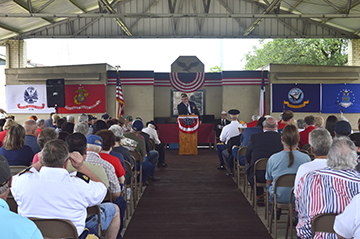 Cars packed the parking lot and lined Texas 73 as a crowd of veterans and their families gathered to commemorate Memorial Day Monday at Veterans’ Memorial Park in Port Arthur.

Generations of families attended the event to pay homage to those who died in service and to remember loved ones. Some wandered around the park looking at each memorial, searching for names of family members and friends, taking photos and educating their children and grandchildren about their family’s service members. 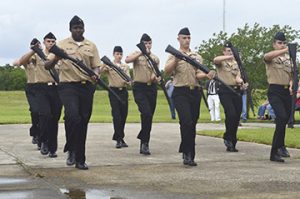 A band playing songs honoring each branch of the military punctuated the ceremony, as veterans stood for their respective songs and saluted. Flags representing each branch of military service as well as an abundance of American and Texas flags were flying throughout the park and on vehicles.

Eyes were wet with pride and remembrance as the gathering was dedicated to veterans and a moment of silence was observed on behalf of those who gave the ultimate sacrifice. Following the traditional firing of the canon three times, people stood as the flags were ceremoniously marched into the pavilion where the Driftwood Quartet sang the national anthem followed by the recitation of the Pledge of Allegiance by all in attendance. The invocation followed. 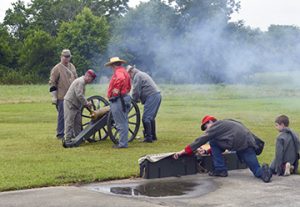 A scene from the Memorial Day event.
Brandianne Hinton/The News

Then the Westbrook High School’s Junior ROTC drill teams were introduced and performed choreographed drill routines of their own making to show off their skills. There were two teams, armed and unarmed. The unarmed team of young women was first to wow the crowd with several minutes of precision drills. The unarmed team currently is ranked third in Texas. The all male, armed drill squad followed them. Veterans praised Sargent Major Kenneth Akins, Naval Junior ROTC instructor, for grooming future military.