It was another tough day at the NCAA Championships in Sugar Grove, Ill., for Port Neches-Groves ex Braden Bailey, but his Baylor teammates did a good job of picking up the slack and keeping the Bears in contention.

Bailey, who had to be on the 15th tee at 6:30 a.m. to play the final four holes of his opening round, wound up playing them in one over to finish at 74.

Things got worse in round two as back-to-back double bogeys on his seventh and eighth holes of the day led to a 76 that did not count toward the team total.

With Hunter Shattuck shooting 68 for 138, Matthew Perrine firing a 67 for 139 and Cooper Dossey posting a 70 for 142 at Rich Harvest Farms Golf Club, the Bears were in position to go really low. Their fourth score, however, was Garrett May’s three-over 75.
At the 36-hole mark, Baylor is tied with LSU for seventh place at 8 under. UNLV is the team leader at minus 14, followed by Oklahoma at minus 13, Illinois at minus l1 and Vanderbilt and Auburn at minus 10.

After today’s third round, the tournament field will be cut from 30 teams to 15. Eighteen more holes will be played Monday, then there will be a cut to the low eight teams for two days of match play.

Except for a 64 in the second round of the Stanford regional, Bailey has struggled with his game the past four tournaments. His 36-hole total of 150 has him tied for 111 in a field of 155 players.
Branden Thornberry of Mississippi is the individual leader at 9-under 133.

Texas’ Scottie Scheffler is second at 134. Scheffler’s Longhorns are tied for 12th in team play and will need another strong round from him on Sunday to make the team cut. 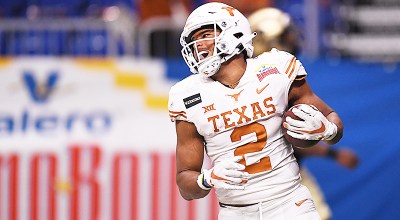