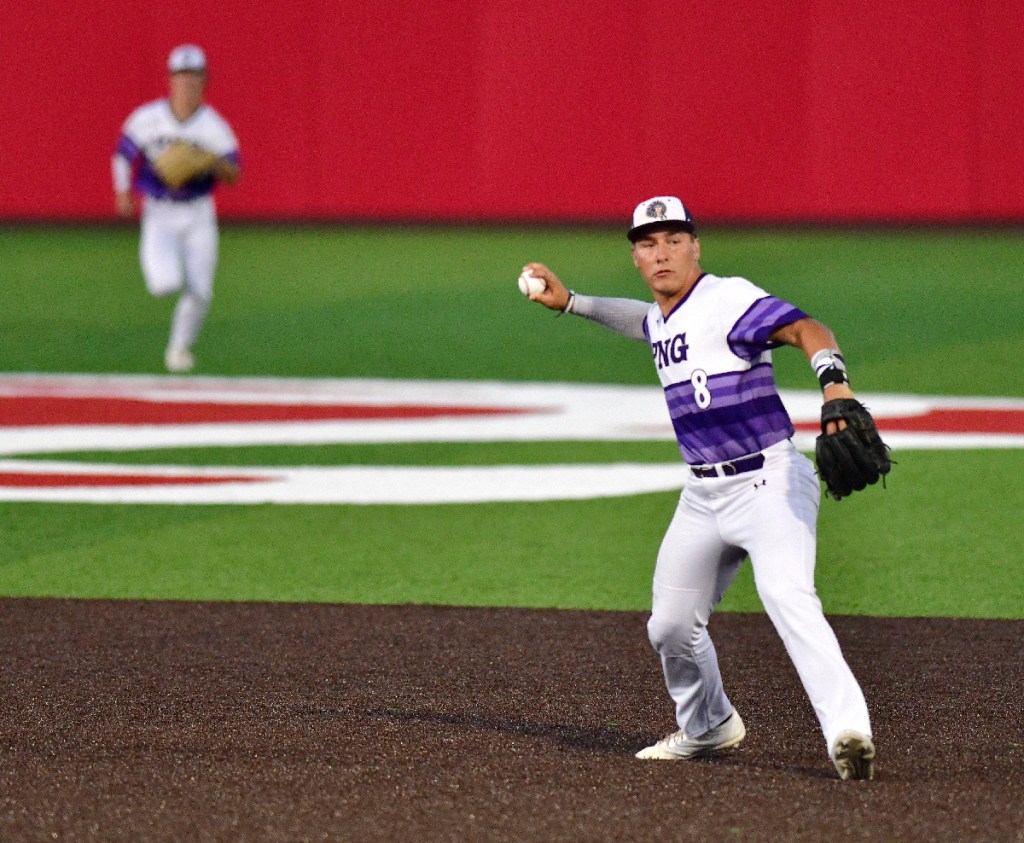 Logan LeJeune’s high school baseball career has taken another step — to the 5A Region III semifinals. (Darren Greenway/Special to The News)

PORT NECHES — The last time Port Neches-Groves played in a regional semifinal was six months ago. Logan LeJeune was there.

The last time the Indians got that far in baseball before today was 2010. PNG’s football team had last made the regional semis later that fall.

So, this weekend’s 5A Region III baseball semifinal round adds to a special school year in the PNG annals. And LeJeune will be there, also.

“You always shoot for the goal of making it to state,” said LeJeune, a second baseman who helped the football Indians go far as a running back and linebacker in the fall. “Getting closer and closer to graduation, playing baseball is going to come to where you just come to practice. You don’t have to go to school.”

LeJeune somewhat got that feeling during football season, when the Indians’ area-round win over Fort Bend Willowridge allowed their friends and family to gather at The Reservation for an open practice Thanksgiving morning. College Station beat PNG in the regional semifinal.

“I like doing it for football, during the Thanksgiving break, just coming to practice and spending time with your team,” LeJeune said. “Just being a senior and a leader, just coming out and working hard every day, it’s a great feeling.”

Dylan McGough, Jacob Vaughan and Zach Murdock, who like LeJeune are among PNG’s 11 baseball seniors, also put on the football pads and won District 22-5A championships in both sports. PNG baseball coach Scott Carter, also a football assistant, has been there for both thrills of district glory.

“It’s fun around here,” Carter said. “At PNG, we try to coach a lot of sports. Coaching in football and baseball and seeing stuff like that on both sides, you get to watch them compete in the fall and the spring, and they just continue to have fun. The team chemistry is just so good. They like each other so much.”

A son of a football coach, LeJeune has played no small role in his senior year. He nearly hit for the cycle against Vidor when he went 4 for 5 with two singles, triple and a home run.

“I had a line drive to center field that was [stopped by] a diving catch, and it would have been a double,” he said. “We all played good that game and we all hit well that game, so that’s the only reason I remember it.”

One of five players to play all 37 games for the Indians (28-7-2) this season, LeJeune has been a model of consistency, too. He’s a .311 batter with five triples and a home run, and he’s committed only two errors.

If the Indians can win the best-of-three baseball series against Tomball, which begins tonight at Crosby, they will reach a long-awaited step in the regional finals, the last round before the state tournament, where PNG last played in 2004 — just before these seniors began kindergarten.

Baseball is the favorite sport for LeJeune, who’ll play at Lamar next year, so the next step would be huge for him.

“After last year, we had a lot of young guys step up,” LeJeune said about the baseball Indians. “We’re conquering everything we planned on doing right now. So, I mean, I didn’t expect anything else.”

Carter talked much about the team’s initiative during the regional quarters against Barbers Hill, as the Indians responded from a shutout loss to post two shutout wins. LeJeune said it wasn’t just the seniors’ idea to show up to put in extra work or show a little more focus in the pregame.

“It was everybody,” he said. “It was not only the seniors. It was a lot of the underclassmen, too. The bench players had a role and stepped up in our two wins. Everybody knew what their job was and what they had to do to just advance in the playoffs.”