It all comes down to this: Cardinals’ magic number for Southland berth is 1 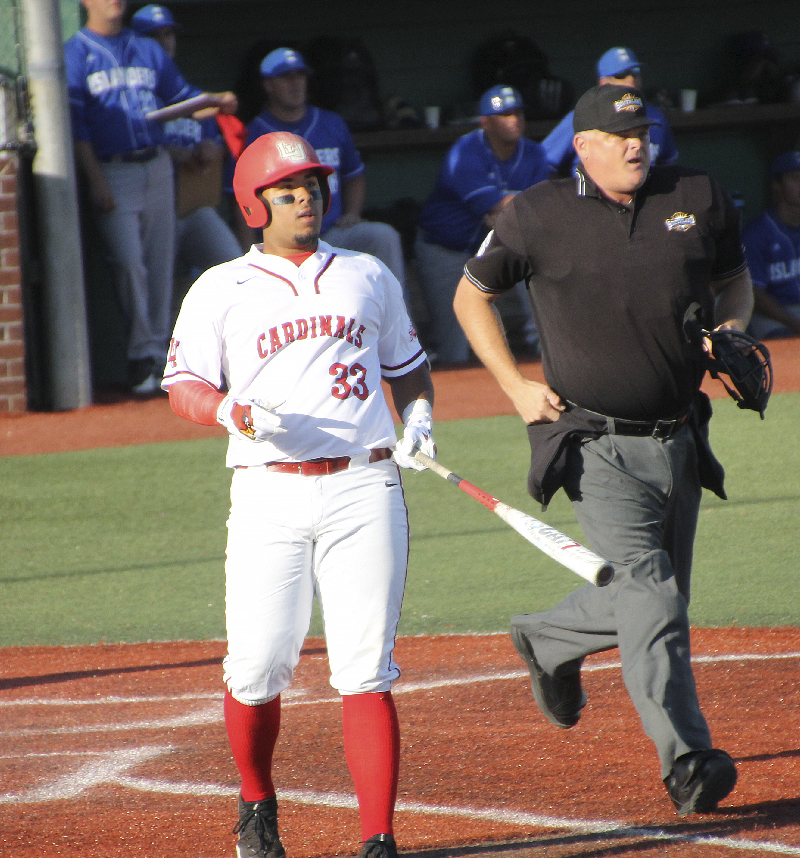 Lamar sports information
LAKE CHARLES — An all-important weekend is on the horizon for the Lamar baseball team, who is looking to clinch a spot in the Southland Conference tournament against a rival McNeese State team that is trying to lock up a league championship – all in the last weekend of regular season.
The series is slated to start at Joe Miller Ballpark on Thursday at 6 p.m.
The second game of the series is scheduled for 6 p.m. Friday and the season finale is at 3 p.m. Saturday afternoon.
The Cardinals (32-21, 15-12 Southland) are locked in a fifth-place tie with Central Arkansas, one game ahead of a two-way tie for seventh between Stephen F. Austin and Nicholls State. New Orleans is ninth, two games behind the Cardinals and two games ahead of 10th place Texas A&M-Corpus Christi.
The magic number for the Cardinals to get in is one game, also hinging on the results of Central Arkansas’ series against Nicholls, SFA’s set against Houston Baptist, and New Orleans’ matchup at Northwestern State. McNeese (34-17, 20-7) is the league’s front runner and has clinched a spot along with Southeastern Louisiana and Houston Baptist.
Lamar carries its season-longest six-game win streak into the series, in which LU is hitting at a .337 clip and averaging 9.3 runs per game, led by Grant DeVore’s .565 (13-of-23) average in that span. Over the streak, LU has seven players hitting over .300, including Phil Ingram’s .435 mark and Vincent Dellocono’s .400.
DeVore, who’s recorded multiple hits in his last seven games, has upped his average to third on the team at .317, trailing Robin Adames (.346) and Cutter McDowell (.367). McDowell is tied with Reid Russell for the team lead in runs scored at 46, and Adames tops the team with 51 RBI. Russell is tied with Bryndan Arredondo for a .313 batting average.
The Cardinals will continue with right-hander Carson Lance (7-5, 3.60 earned run average) for the series opener, and he’ll be faced by McNeese’s left-hander Austin Sanders (6-2, 3.15). Lance tossed 7 1/3 innings for Lamar against Stephen F. Austin with four earned runs allowed on eight hits, and the junior punched out eight batters.
Jace Campbell (3-4, 4.37) – whose last appearances was in relief at Oklahoma State on May 7 – will start Friday night, and will be matched by right-hander Rhett Deaton (8-2, 3.64). Saturday’s season finale will be started by senior Jimmy Johnson (6-4, 4.37) for the Cardinals. Johnson started the series finale with SFA, and worked 7 2/3 innings with three earned runs allowed on nine hits and one walk.
McNeese is led offensively by outfielder Shane Selman, who is hitting .351 with 51 RBI and 34 runs scored. He sits in a tie of the Southland Conference lead with 13 home runs. Joe Provenzano follows with a .339 average and 47 RBI and Ricky Ramirez has a .326 mark with 52 runs, which only follows Robiie Podorsky’s (.316) 61 runs. Matt Gaillier has a .321 batting mark with 40 runs scored and 46 RBI.