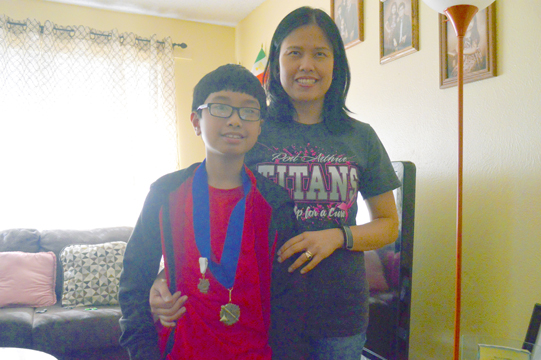 Let’s say it runs in the family.

Azineth Buan is a math teacher at Memorial High School where she teaches Strategic Learning in Math for grades 10 through 12. Buan was one of five secondary teachers recently awarded the 2017 Reaud Excellence in Education Award.

Her son, Axel Jotham Buan, is a sixth grade student at Abraham Lincoln Middle School. Axel was part of Epic Dynamics, a team that won the Innovation Award under the Engineering Design Challenge Special Awards in the 2017 TAME State STEM Competition. Axel also won the Judges’ Choice award in Engineering in San Antonio.

The mother aims for educator excellence while the son strives for academic achievement. It’s just good fortune that both are a proud part of the Port Arthur Independent School District.

Buan said the principal of her high school, Dr. Glenn Mitchell, had nominated her not once, not twice but three times for the prestigious award.

“The principal said to me, ‘I want you to complete this because you are very deserving of it.’”

Buan said that when she received her award, the Reaud Chief Operating Officer Ed Keller told her that her resume stood out.

She expressed how thankful she was for both the nominations and for the award.

“We all know that it’s a big honor. Every time we receive an award, I’m not only representing myself, I’m representing the Port Arthur School District,” Buan said. “I’m so proud to let the community know that I’m from PAISD.”

According to her, some people have a negative impression of Port Arthur and its schools, and have asked her why she even teaches at Memorial.

“I want people to know I come from PAISD,” Buan said. “This is the quality of teacher you should expect — not the negative one other people expect.”

Buan said there are many wonderful teachers currently employed at the district, and that they represent excellent education in the community.

“I make a point of saying, ‘I’m MEAN,’” Buan said. “My MEAN is this: Making Excellence A Necessity. I am MEAN. Are you MEAN?”

Buan said 57 out of her 80 students who took the STAAR test this year passed.

“In one division, 76 percent of them passed.”

In a class that caters to students who had already failed Algebra I, that would seem to be no small task.

When asked what drives her need to reach out to students and to help them understand, Buan said it comes down to love.

“Actually, (it’s) your love. Whatever I do starts from an inner drive — an intrinsic motivation — to make a difference, especially if you know the kids are coming from different circumstances.”

Buan said her teaching method starts with the desire to help and to educate.

“If you do not really understand where your (students) are coming from and if you don’t have the heart of care for these kids, you’ll lose patience,” Buan said.

“My inner desire is to have education be an important part of their lives. That drives me. My love for them drives me.”

In what might be a similar vein, her son Axel would appear to have similar standards when it comes to achievements.

This was the first year Axel competed in the Texas Alliance for Minorities in Engineering (TAME) STEM competition but, according to him, he was inspired to do it a few years prior.

“When I was in the third grade, I was visited by the TAME truck,” Axel said. “It motivated me to learn more about engineering.

“I’ve always been interested in engineering because I have built a lot of things over the years. I’ve built things with mechanisms and with the things around me.”

On competing in the contest, Axel only expressed excitement about the experience.

“I felt excited because I was going to be able to talk to more people like me and ask questions for help and excel at my level,” he said.

Axel described the work they performed at TAME as “somewhat challenging, but very easy after practice.”

“It felt great knowing my team was a very good team,” Axel said of their first place achievement.

Among their engineering design challenges, Axel said they had to build windmills from parts given them, a catapult and the release of satellite wings using only one string. This was in addition to an 80-question test on math and science that each member took.

During his free time, Axel can be found working on passion projects, such as the real-life web shooter inspired by the comic book character Spider-Man.

“I loved Spider-Man, so I wanted to build what he built,” he said.

Axel’s contraption used a spring lock to act as the generating force for the shooter, so that when it was pushed and let go, it would shoot a piece of string — or “web” — 10 feet into the air.

According to Axel, he gets a lot of ideas for his projects from watching online videos.

“Most of the latest trending stuff is fidget spinners,” Axel said. “I didn’t have the money to buy one, so I built one from coins and hot glue.”

Axel gave a comparison of his homemade one and one bought at retail. Both fidget spinners functioned equally well, with only superficial differences.

When asked if his mother was a strong influence in his academic career, Axel said,

“Although my mom is a teacher, I felt the drive for success myself. I always wanted to excel in class.

“I like mathematics because I love calculating shapes. And in engineering, the things I build I usually need a lot of math to get them perfect.”

Axel said he imagines himself becoming a mechanical engineer and building stuff when he graduates.

In addition, Axel has another hobby that tests his thinking skills — solving Rubik’s Cubes, or “cubing.”

In fact, he has competed in cubing contests where he can solve a three-by-three cube in an average of 15 seconds and a two-by-two one in seven seconds.

“It started when I was in fourth grade and I was 10,” Axel said. “My father was able to solve it in three minutes and I was intrigued. I wanted to become like him.”

Axel has two YouTube channels: 1914axel and EC-ElectroCuber. As of the time of this writing, they have 829 and 33 subscribers respectively. Some videos range from hundreds to thousands of independent views.

“I upload a blend of engineering and a lot of projects that I do,” Axel said. “For example, I love Greek mythology and Percy Jackson; so, I built my own Riptide sword.

“It was half a foot from the handle and extends three feet in total.”

Other videos include cubing and various competitions surrounding cubing.