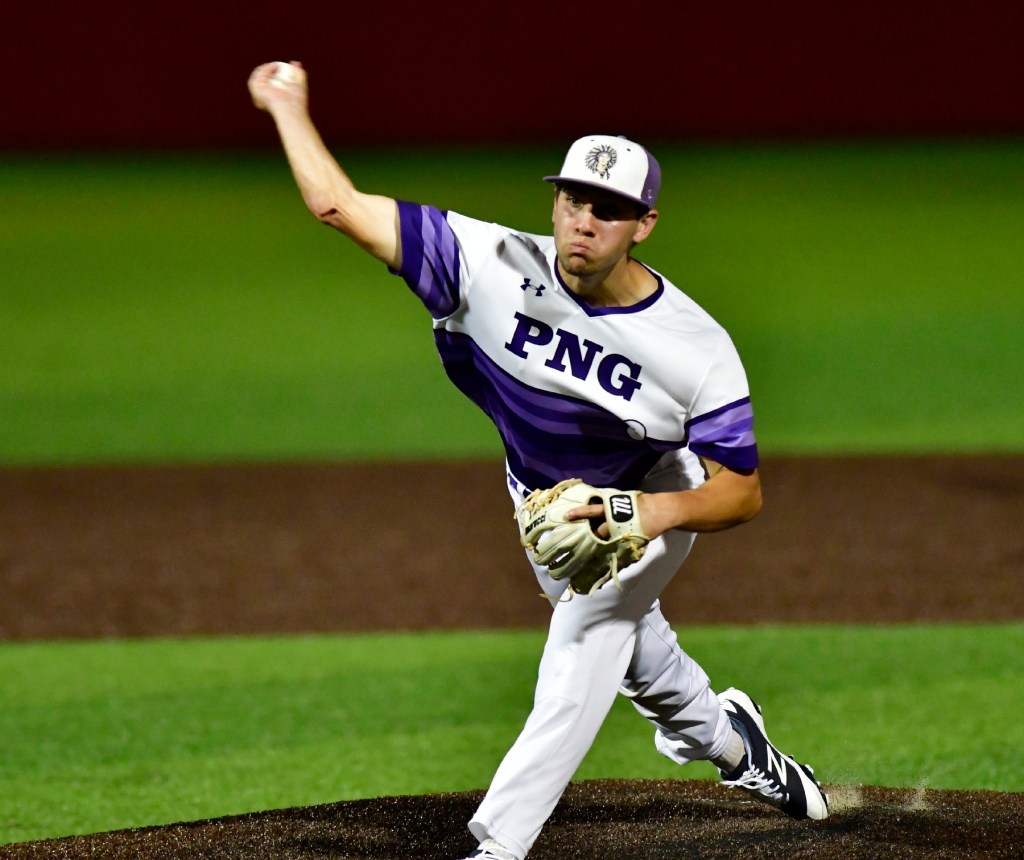 Nathan Vidrine of PNG fires a pitch against Manvel on Saturday in Crosby. (Darren Greenway/Special to The News)

PORT NECHES — With two complete-game victories and three more appearances of six-plus innings, Port Neches-Groves senior Nathan Vidrine could earn the nickname “Marathon Man.”
“His endurance on the mound has been really good, but his endurance in baseball has been even better,” Indians coach Scott Carter said. “He was a newcomer of the year as a sophomore (in District 22-5A), he was defensive player of the year as a junior, and his accolades this year are coming.”
Whatever accolades are coming Vidrine’s way are well-deserved. He accepted one Tuesday afternoon in the form of a scholarship, when he signed with Alvin Community College.
The pitcher delivered maybe his finest performance in an Indians uniform Saturday in Game 3 of the 5A area round vs. Manvel in Crosby. Although Manvel jumped to a 3-0 lead, all runs unearned, in the first inning, Vidrine wasn’t shaken and threw his second complete-game effort of the season, holding the Mavericks to three hits in a dramatic 4-3 PNG win.
“They had a couple of bunts early,” Vidrine said. “Coach knew that was going to happen, but unfortunately we made an error and we had to play back.”
Vidrine is perfectly comfortable with the role of distance man.
“We go through that in practice a lot,” he said. “We go through bullpens, and that’s really what helps.”

Cool and collected
The win has put the three-time defending 22-5A champion Indians (26-6-2) in the regional quarterfinal round for the first time in Carter’s four years at the helm. But Vidrine’s ice water-in-his-veins persona on the mound continue to stand out in the mind of classmate Logan LeJeune, who signed with Lamar in November.
“You never see another pitcher show the least amount of emotion,” LeJeune said. “It’s not the biggest pitching tool, but showing no emotion on that mound is like, other teams cannot get him down. He shows no emotion in his pitching.”
After the Indians scored three runs in top of the seventh on a ball and two hit batsmen, an error at shortstop allowed Damon Fernandez on base to lead off the Manvel half of the inning. That apparently didn’t shake Vidrine, who promptly retired the next three batters in eight pitches, striking out the last guy he faced.
“He’s definitely the guy we want to put in this situation. If we want to have this game continue on, we want to put the game in our senior’s hands, and he’s been that guy for three years,” Carter said. “We knew he was invested. He would give us his best effort and he threw an outstanding ballgame that day.”
Vidrine struck out eight and recorded 66 strikes in 94 pitches, a nice work of art in LeJeune’s eyes.
“Then with him being able to paint the corners like he does, he’s so baseball savvy, it’s awesome,” LeJeune said.

Indians take next step
It can be said Barbers Hill is a familiar postseason opponent.
PNG beat Barbers Hill in the 5A football bi-district round, just days after the Eagles’ volleyball team won at The Reservation in the volleyball regionals. Now, the Indians’ baseball team gets its turn against the Eagles (24-3, 14-0 in 21-5A) in a battle of teams that went unbeaten in district play.
“Barbers Hill is as advertised,” Carter said. “They’re really good. There are eight teams left in the playoffs, and we’re happy to be one of them.”
The Eagles have not been scored on this postseason, sweeping Nederland 1-0 and 4-0 and beating Santa Fe 8-0 and 2-0. PNG has allowed 14 runs in the playoffs, but nine of them came in a win over Humble.
It’ll likely be hard to produce enough offense against Vidrine, who has a 1.83 ERA on the season and has allowed only two earned runs in his last six games.
“I know I have my teammates behind me always,” Carter said. “Coach just told me to go out there and play my hardest [on Saturday]. That’s what we did and we got the job done.”
The series starts at 7:30 p.m. Thursday in Mont Belvieu and moves to PNG for Game 2 at the same time Friday. Game 3 will be in Crosby if necessary, with the time to be announced.
“It would be really special to get this one and make it to the next round, but we’re glad to be here,” Carter said. “We’re honored to have this opportunity and we’re looking forward to a great series.”

PNG to Southwestern
Vidrine shared his signing ceremony with three PNG soccer players, all of whom are going to Southwestern University.
Team captain Garrison Vanhouten, Colton Stone and Caleb Davis committed to the Division III university in Georgetown. Vanhouten, the 22-5A MVP, made the all-district first team for the second straight year and was a second-teamer as a sophomore. Stone has racked up 27 goals the last two seasons (13 this year) and is a two-time first-team all-district selection. Davis made the first team this year as a midfielder.
The Indians finished 22-5A play unbeaten and reached the Regjon III quarterfinals.