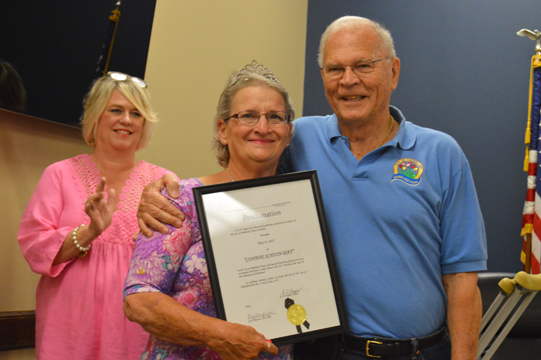 Or, one could just say she’s been a swell mother to her family — all of which has earned her the distinction of being the 2017 Nederland Mother of the Year.

“I always had a lot of energy,” Schion said. “I guess I was born that way. My mom was that way and my daughter, too. We just think it’s normal.”

Schion said the constant activity and “going and blowing” with family, friends and the community helps keep her young.

In fact, Schion has donated much of her time and efforts recently towards the Nederland High School Class of 2017 Project Celebration.

“Well, this is my granddaughter; she’s graduating this year,” Schion said of her involvement. “We’re calling it the ‘Year of Riley.’ It’s a really big deal.”

Schion was involved with the project when her daughter Jodi graduated from NHS as well.

“It’s a safe, all-night party,” Schion said. “The (school) makes it huge. A high percentage of seniors go because it’s fun, food and a lot of festivities.”

Schion said it was also a great way to face the numerous tragedies one hears about in the news.

“I think it’s so important. I can’t think of anything more worthy to spend my time with.” 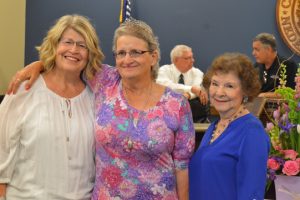 During this period, however, Schion was diagnosed with kidney cancer. This was the second time in two years she has had such a diagnosis.

“It was by the hand of God they found it,” Schion said. “I went into the hospital with something completely unrelated and by fluke they found it and it was small.”

Thankfully, it was small enough and early enough for doctors to safely remove it. But in a situation where most people would have taken time off to recover or to reflect, Schion was right back working and volunteering for Project Celebration as soon as possible.

In fact, she was helping to raise funds the day before her surgery.

“Jodi asked me, ‘What are you doing here? You are having surgery the next morning,’” Schion said. “And I said, ‘That’s why I’m here. I’m here to take my mind off it.’”

Schion said having her kidney removed was a small surgery, so she could come back the next day.

“Those are one of the things to keeping busy — it keeps you young and it keeps you from dwelling on ‘what if?’”

Still, Schion and her husband, Steve, do find ways to kick back, relax and ride a bike or two. They started a local chapter of the Indian Motorcycle Club.

“Jodi picks on me and says her parents are in a biker gang,” Schion said with a laugh. “We got an Indian motorcycle bike last year and it’s like riding a Cadillac.”

One of the Schions’ friends is president of the club and she is the secretary and treasurer of it.

“It’s a great group of people and a great way to have a fellowship,” Schion said.

She said everyone in the club rides safely and that all age groups are welcome to join.

“We took a trip to Avery Island, that’s where they make Tabasco,” Schion said. “It was a three-hour ride and there were 12 bikes with 17 people. We all rode in formation.”

Connie and Steve Schion have been together for over 50 years.

Schion recalled how Steve skated up to her one day at the skating rink and asked her to marry him. He gave her a ring and then he skated off.

“I didn’t see him until next week,” Schion said. “We were so young. I couldn’t date until two years later. Then I had to wait three years until I got married.”

Schion was honored Thursday at city hall by the Nederland Chamber of Commerce and the city mayor.

Her coronation was well attended by family and friends alike. Among them: daughter Jodi and son-in-law Mike Love and their children Riley and Daisy; son Matt Schion and his three children: Madison, Macy and Mason. 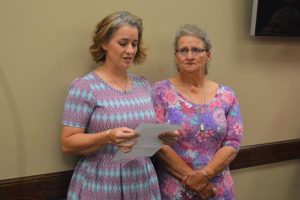 Jodi Love (left) stands next to her mother Connie Schion as she reads her letter of nomination nominating Schion for 2017 Nederland Mother of the Year. (Lorenzo Salinas/The News)

Jodi read with emotion her letter of nomination for her mother, who stood by her side:

“She is most deserving of this honor; and in fact, if you have a Mother of the Decade or even Century, let me know.”

“I just want to thank the Chamber for such a beautiful event,” Schion said afterward. “And my Jodi. Everyone was so wonderful there. It was so pretty and thoughtful what everyone did.”

“Connie, you are queen of the day,” Nugent said.