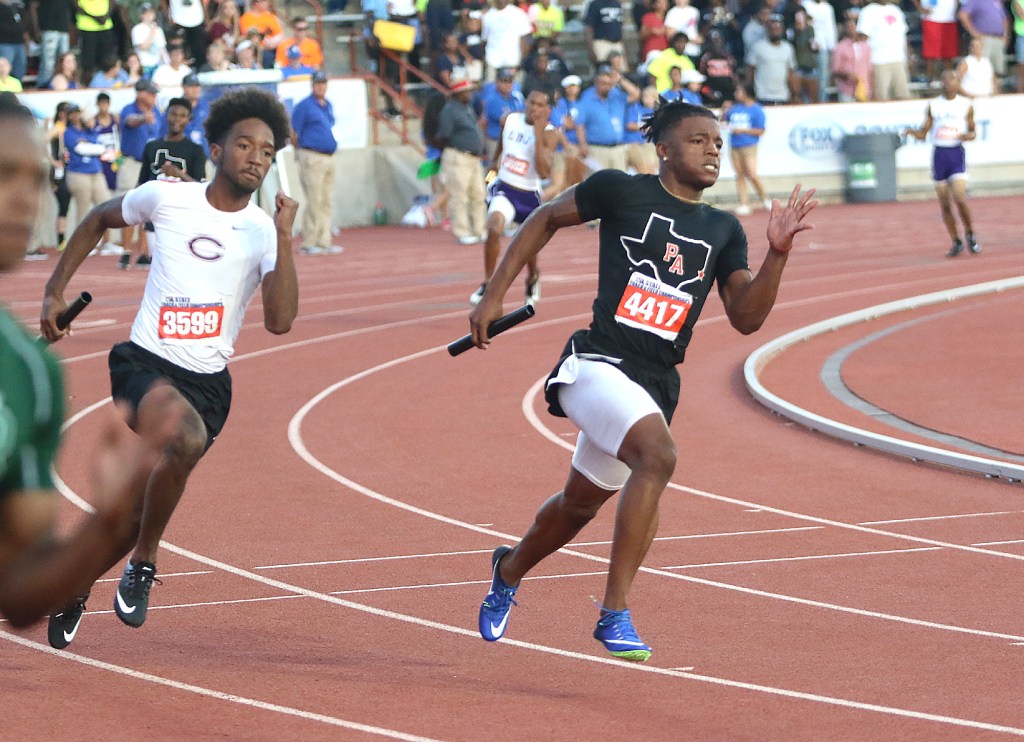 De’Andre Angelle of Memorial rounds the curve Friday during a national record-setting 4x200-meter run in the 5A state meet at Mike A. Myers Stadium in Austin. (MIchael Sudhalter/Special to The News)

AUSTIN — The Port Arthur Memorial boys track and field team traveled to the state capital with plans of making their city proud.

“Before we arrived at the stadium, we discussed that we were going to do this for our city,” said senior De’Andre Angelle, who will go to Texas Southern on a football scholarship.

The Titans finished second to 5A state champion Manvel, 85-63, which marked the second time in three years that Memorial was runner-up at the state meet. (The Titans were second in 6A in 2015).

Senior Kary Vincent Jr., an LSU football signee, won the 200-meter dash with a personal record of 20.71 seconds, eclipsing his previous best of 20.77 that he set at the 5A Region III meet April 29 in Humble. Vincent defeated the defending 5A state champion, Fort Bend Marshall’s Shamon Ehiemua, and came within .04 of setting a new 5A record.

“I knew, in order to win, I’d have to catch Ehiemua by the time we hit the curve, and that’s what I did,” Vincent said.

In both relays, the Titans defeated Manvel, the frontrunner for much of the meet.

Memorial entered the 4×400 with an outside chance of winning the city’s first boys team track title in 46 years. Memorial defeated Manvel in the 4×200 after a narrow loss at regionals, but the Mavericks returned the favor in the 4×400. (Memorial won the 4×400 at regionals, but finished third behind Manvel and Lancaster at state).

“The state meet is all that matters — all of the other meets are behind us,” Angelle said.

“We wanted to be the fastest ever, and that’s what we did,” Vincent said. “We’ve been working really hard, and our goal was to focus on each race.”

Said Brown, who was a junior high student just a year ago, “I could feel myself flying!”

Hull competed in the long jump, finishing sixth with a jump of 22 feet, 7 ¾ inches.

On the girls side, freshman Capri Wilson finished fourth in the 100-meter dash.

Wilson ran the final leg of the girls 4×100 relay, which featured fellow underclassmen Aniya Duhon, Zykirra Cabarras and Coreyanna Gorrer. They finished with fifth with a time of 46.99.