“Betting, Booze and Brothels” — Learn about the areas racy past at free Museum event 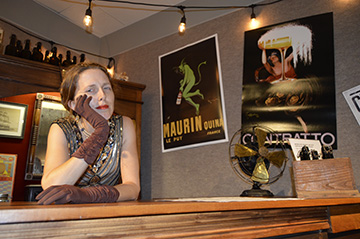 Sarah Bellian, curator at the Museum of the Gulf Coast poses in a 1920s style flapper dress at the “Betting, Booze and Brothels” exhibit about Prohibition in Jefferson County. A reception, free to the public, will be hosted by the museum from 6 to 8 p.m. Friday, May 12. Brandiaane Hinton/The News

On Friday, May 12, the authors of a book that examines the area’s more racy past will be at the Museum of the Gulf Coast to sign books and visit with history buffs.

The book is “Betting, Booze, and Brothels: Vice, Corruption, and Justice in Jefferson County Texas from Spindletop to the James Commission,” and it is by Wanda Landrey and Laura O’Toole.

A reception, free to the public, will be hosted by the Museum Friday, from 6 – 8 p.m. The authors will be available to sign their books. Books can be purchased at the Museum Store. 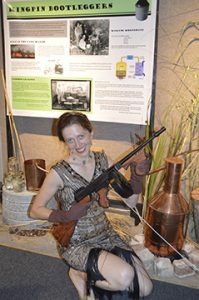 The museum is also featuring an exhibit inspired by the book. The exhibit chronicles the history of three of Southeast Texas and Louisiana’s favorite vices: betting, booze, and brothels.

In 1961 a young and ambitious Texas Representative named Tom James became the face of an investigation into crime, vice, and government corruption in Jefferson County. What he found would shock and shame everyone.

Since before Spindletop, both Beaumont and Port Arthur were “wide open” towns. Elected officials provided immunity for every kind of gambling, liquor violations, and prostitution – for a price. The disregard for the law was so blatant that criminals deposited unmarked envelopes full of payoff money right on the seats of police cars. Port Arthur’s fourteen well-known brothels earned the city the nickname “the Wickedest Town in Texas.”

As citizens watched the drama of the James Commission unfold on the news, serious questions began to arise. Was it really possible to eradicate vice? How did everyone become so corrupt?

What, if anything, should be done about it?

See photographs and objects related to the history of vice in our region, from the Maceo gambling empire of Galveston to Port Arthur’s own Marcella Chadwell and Beaumont’s infamous Rita Ainsworth. Hear recordings of silly, salacious, and scandalous stories of local bootleggers and benevolent madams from those who knew them well.

The museum is located at 700 Procter St. in Port Arthur.