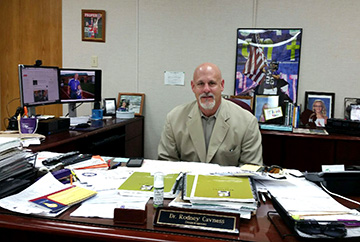 The unanimous decision was made by TCISD trustees on Tuesday, according to information from that district’s website.

“It’s been wonderful here,” Cavness said from his office on Wednesday. “It’s bittersweet to leave a lot of good friends I have here, from Evadale, Silsbee, Beaumont, Port Neches-Groves and across Texas.”

The longtime educator and administrator said he’s leaving happy with a little bit of sadness. Texas City ISD, he added, is a lot like PNG — “They do well academically, they are financially strong and have a fantastic career and technology program. The people love their schools and their city.”

Cavness has enjoyed his years with the district.

“Port Neches and Groves, these two cities are fantastic places to live. There’s the tradition here, the winning attitude, commitment to excellence. It’s a great place to live, work and raise a family,” he said. “I have been recruited for jobs for the past five years now. PNGISD being the place it is, I really didn’t look at some places. This move is good for my family and I professionally and financially.”

Cavness has been an outspoken leader of the school district often discussing legislative and school funding issues and has not shied away from topics some might consider tough to discuss.

He came aboard PNGISD in 2010 and said straight off that he was not going to be a complacent leader, according to a September 2010 story in The Port Arthur News.

His actions have shown that to be true.

In 2011, not long after he arrived at PNG, he held a town hall meeting to inform the pubic of the state budget deficit, its potential impact on the district and the plan to address the issue. During this time districts across the state were feeling the budgetary pinch with neighboring Nederland Independent School District approving a resolution for financial exigency that would allow them to terminate employees through a reduction in force, if needed.

PNG opted for a different approach, offering incentives for district employees who notify the district of their resignation or retirement by a specific date.

In 2016, Cavness was unapologetic in his disdain for then president Barack Obama’s transgender bathroom guidelines.

When he was superintendent at Evadale ISD he was credited with leading the near low-performing district to academic excellence and developed a strategy to bring that district’s fund balance into the black.

He was also in the media spotlight as principal at West Brook High School in Beaumont when two students were killed and more than 20 injured when a charter bus crashed while taking the girls soccer team to a playoff game in 2006.

“Dr. Cavness has a proven track record of strong financial accountability and utilizing effective academic practices, while enhancing teamwork. He’s a big supporter of enrichment programs including academic, athletics and fine arts. He also is a proponent of CTE (Career and Technical Education) and STEM (Science, Technology, Engineering and Mathematics) programs. These are just a few reasons why we believe Dr. Cavness is the ideal candidate to lead Texas City ISD,” TCISD board president Dickey Campbell said in a press release.

PNGISD board of trustees will likely discuss Cavness’ timeline during Monday’s board meeting.

The state requires a 21-day waiting period before the lone finalist can sign a contract and become an official employee of the district. The TCISD board of trustees will call a special meeting on May 23 where Cavness is expected to sign a contract, according to information from TCISD.